Well here we are, the end of October already, and Halloween has arrived. A number of years ago, Brion and I decided to take a different approach to this occasion. Rather than spending the evening running to the door to hand out treats, I would make some special goodies for our immediate neighbor’s ‘kids’. We have been lucky to have had the same neighbors for many years. Since food is my passion, its always fun to ‘create’ something that I think our four ‘young’ people will enjoy.

My choice of treats this year are brownie ghosts, krispie candy corn and some bite size pizzas. Most kids love chocolate so I think brownies will cover that and I swapped out the ‘waxy’ candy for rice krispies in the candy corn treats. Pizza bites aren’t exactly following the Halloween theme but the kids are getting older and I’m sure they will love them anyway.

Just an interesting little side note on the actual candy corn ‘candy’ since they seem to be synonymous with Halloween. Originally they were never tied to any time of year. Many candies of the day were molded into what was recognizable to regular folks. At the time, that was vegetables, fruits and other simple, earthy things.

When the Goelitz Confectionery Company first produced candy corn, it was called ‘chicken feed’. The boxes were illustrated with a colorful rooster logo and a tag line that read: ‘Something Worth Crowing For’. The multi-colored design was ground-breaking in the candy industry at the time it was invented. One of candy corn’s least favored qualities is that waxy texture. Strangely enough, even after more than 120 years, it still has a huge following as well as many other candy corn related and/or flavored recipes on the market.

ENJOY YOUR HALLOWEEN IN WHATEVER WAY WORKS FOR YOU!

The word ‘gratin’ or ‘au gratin’  has been given numerous alternative and incorrect definitions. Many think that the term is French for ‘with cheese’, others say that it refers to a dish with a browned topping and some even claim that gratin means a baked casserole.

The word gratin actually derives from the French word grater or gratter, meaning ‘to grate’. Originally it meant something more like ‘scrapings’. This referred to the browned crusty material that forms on the bottom or the act of scraping loose these crusty bits and stirring them back into the dish during baking. However, it now tends to refer to the browned crust that forms on the top of the baked dish. Toppings generally consist of breadcrumbs, grated cheese, egg and/or butter.

The word gratin is also used to identify the types of cookware in which such a meal is cooked. Traditionally, they are oval, but can also be round and come in graduated sizes and are made of clay-based ceramic, metal or oven-proof glass.

This au gratin combines ham and cauliflower in a creamy, Parmesan sauce and is topped with cheddar cheese. We really enjoyed it.

Despite our ever present nostalgia for the foods of childhood, tastes and recipes are always evolving. I came across this recipe in a Taste of Home magazine recently. It has all the flavors of a favorite casserole come together in the comfort of ‘mac & cheese’.

During the Great Depression era, the idea for boxed macaroni and cheese was born when a salesman used a rubber band to pair packets of the then newly developed, grated Kraft cheese with boxes of pasta and convinced stores to sell them. In 1937, Kraft Macaroni & Cheese (known as Kraft Dinner in Canada) was introduced with the slogan ‘make a meal for four in nine minutes for the cost of around nineteen cents’. It was an immediate success in the USA & Canada.

Traditional mac & cheese is a casserole baked in the oven, however, it may be prepared in a saucepan on the top of the stove. This particular casserole recipe takes the whole idea to a new level. Chicken, bacon, macaroni, three cheeses and Ranch dressing! I had tasted ranch dressing on chicken and bacon pizza so why not? Brion and I loved the end result making it a ‘keeper’ in our meal rotation. 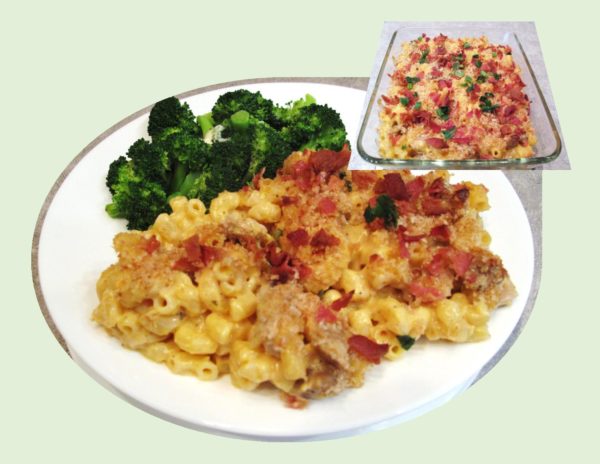 One of the supper dishes I remember my mother teaching me how to make was scalloped potatoes. The recipe read something like this:

Gratins are very popular in Germany. Potato & brussel sprouts gratin is a typical dish during fall and winter season. There are numerous variations such as adding ham or combining it with other vegetables like cauliflower, zucchini, peas and carrots. You could also add an egg to the cream if you like.

I always enjoy looking through mom’s ‘vintage’ recipes. I notice there were definitely lots of casseroles — no wonder they still hold appeal for me. Brion is not big on brussel sprouts but I’m going to incorporate this German specialty into our supper meal and see how it goes?!