Despite having a fairly short history, Mexican fajitas are one of the most popular dishes in the world today. Apart from the fact that fajitas are incredibly tasty, they are actually very healthy not to mention the ease in cooking and assembling them.

As with many foods, time has changed the contents of the fajita and has evolved slightly from the original simplicity of the ranch worker’s dish, with different cuts of meat being chosen such as chicken or seafood. The vegetables have not changed as much as the meat, with peppers, onions & chilies still being predominant ingredients in the dish.

Probably, the most important thing when making fajitas is the marinade. It not only makes the ingredients incredibly tender but very flavorful.

Fajitas usually require some tortillas. While they are wonderful tasting, using zucchini noodles (or zoodles) as a base for the fajita chicken gives this meal an amazing flavor. Zucchini is perhaps the most popular choice for vegetable noodles. It’s long, thin shape makes it easy to spiralize and its neutral flavor allows it to pair well with almost any sauce or topping. This meal has such eye appeal along with a great taste. 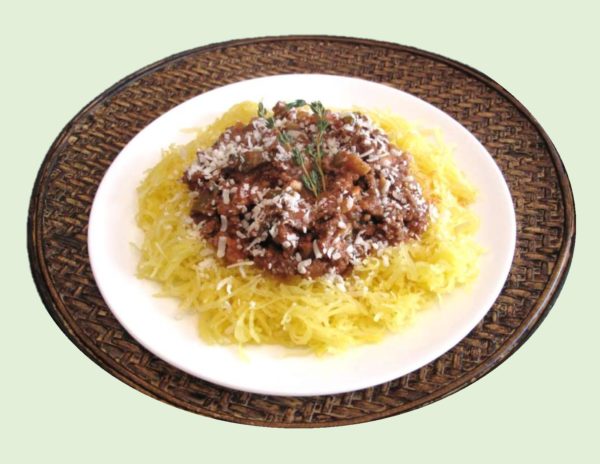 Although rice takes top priority at our house, noodles (pasta) are always a staple nevertheless. Some years ago, we started using the ‘no yolks’ version of egg noodles.

Like many old world pasta products, there is a history. In 1976, Robert Strom created  NO YOLKS. They would become the world’s first                          no-cholesterol egg noodle. They are made with Durum wheat semolina, corn flour, egg whites and have no problem cooking up firm and fluffy.

In Canada, they are the top selling noodle and come in a wide variety of shapes and sizes. In this recipe, I have paired them with my favorite Chia Chicken Meatballs. Does it get more healthy than that?!

When I’m working in the yard, summer always tempts me to spend less time in the kitchen. As much as I love to cook, I find the ‘gardener’ in me takes over. I can’t simply just go out and do a bit of looking. The first thing I know, there’s a little weed that needs to be picked or a plant to prune and that does it — I’m hooked for hours. Nevertheless, one thing for sure and that is the fresh air and exercise builds an appetite which brings me to a fast-to-fix meal.

Today, I’m thinking some chicken fajitas for our evening meal. Before I even go outside, I’ll do a bit of quick prep work, that way it will be a ‘no brainer’ later when I’m tired.

Technically, only beef was used in fajitas, but the term has become ‘blurred’ and describes just about anything that is cooked and served rolled up in a soft flour tortilla. The origin of the fajita goes back to Mexican ranch workers living in West Texas (along the Rio Grande on the Texas-Mexican border) in the late 1930’s or early 1940’s. When a steer was butchered, the workers were given the least desirable parts to eat for partial payment of their wages. Because of this, the workers learned to make good use of a tough cut of beef known as shirt steak. The first print mention of the word fajitas anywhere in the world didn’t occur until the 1970’s.

The chicken breast I’m using in this recipe is marinated for a number of hours making it nice and spicy as well as tender. This is a great little, quick and easy hand held meal.

Chia — the little seed with the huge nutritional profile. Known as a great source of healthy omega-3 fats and fiber as well as positive health effects such as boosting energy, stabilizing blood sugar, aiding digestion and lowering cholesterol.

In the early eighties, when the terracotta ‘Chia Pet’ figurines were first marketed, I really didn’t pay much attention to them. I just thought they were a cute way to grow a ‘houseplant’ never checking out their true potential.

Chia seeds have a fascinating and long history of use in several cultures. The word chia means ‘strength’ in the Mayan language. The Aztecs, Mayans and Incas, supposedly all used chia as a staple of their diets as well as an energy food.

There seem to be endless ways to use these naturally gluten free little seeds. Just to name a few would be, as an egg substitute, in puddings, as a thickener in soups and gravy, in meatballs, sprouted in salads or for breading fish or chicken.

One of the recipes I have featured in my ebook is Chia Chicken Meatballs  served with a fresh zucchini sauce over linguine pasta.

My husband, Brion is all about anything that promotes good health so this meal works for him. The chia seeds definitely give these little chicken meatballs some extra ‘pizzazz’. Hope you enjoy.