Is there anything potatoes can not do! Many cultures make some form of potato cakes with any kind of filling you can imagine. Sauteed cabbage, ground meat, egg and onions, you name it, the possibilities are endless. Mushrooms are by far, one of my most favorite fillings.

Did you know that most of the table mushrooms we eat are all the same variety. The difference is just age.

The white button mushrooms, are simply the youngest variety. They have been cultivated, too, for that white color and soft texture. In the wild these mushrooms are usually browner.

The Portobello is the most mature mushroom; it’s really just an overgrown white mushroom! They are left to grow for longer, until they have spread out into that delicious meaty cap.

The Cremini mushroom is just in between these two varieties. It’s a moderately mature version of the white button mushroom. Mature state means that they have a browner color, firmer texture and better flavor than the younger white mushrooms. Who knew!!

These stuffed potato cakes are such a nice addition to a winter meal. 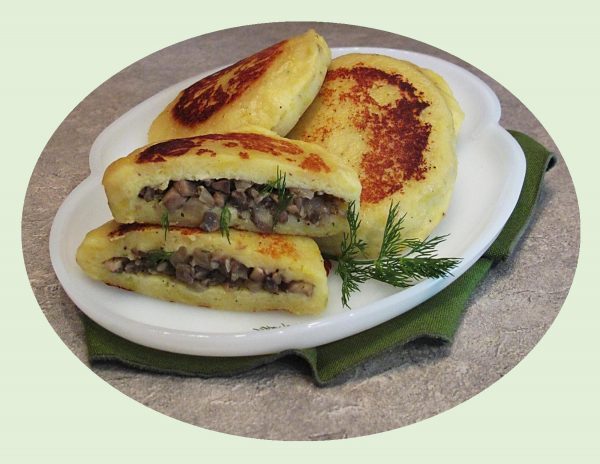 The countryside around Merida, Mexico is home to many plantations or haciendas.They grew a cactus of the Agave family and processed the leaves to remove the fibers inside to make what is called a ‘sisal’ rope and other  related cordage products. Although most haciendas laid abandoned for  many years after the Mexican Revolution and the invention of synthetic  fibers, today many have been restored and turned into luxury hotels,  restaurants, museums and attractions.

On one of our day trips we went to Hacienda Sotuta de Peon. This is a  restoration project focused on preserving the history of how a native plant was farmed for its fibers and made into rope. You can witness the whole process step by step; from plant in the ground, to raw material, to fibre and finished product.

This tour of the plantation was very interesting!  The ‘grand hacienda’, or landowner’s home, was one, very long building. The rooms from kitchen through the bedrooms were all in a row connected by doors. The veranda ran the length of the house  overlooking the pool and beautiful gardens. Sheer opulence in comparison to the conditions of the factory workers a short distance away. Over in the factory, the sisal leaves are lifted up from the street onto a conveyor belt  where it is arranged by hand for maximum efficiency. Equipment,  powered by a loud diesel engine, with overhead drive shafts and big  leather belts, squeezed the leaves. Rivers of green pulp and liquid ran  down to the carts below. The cleaned leaves came out the other side and  workers made individual batches of the fibre and sent them down a rail to the room below where they would be hung out to dry in the  sun.

In the next process, machinery separated short and long fibers, spun it  into grade rope or baled it. When nylon and other synthetic materials  were created it changed the economics of this industry. No longer able to  compete they ultimately had to shut down. At the end of this part of the  tour we were taken on a mule drawn, covered cart to see the fields of the  sisal growing. What was interesting about the ride was that the mule  pulled all of us around the plantation in this cart attached to the same rail  system  that was used over a century ago to transport the workers.

I’m including some of the highlights of Brion’s photos of that day for you  to enjoy. In keeping with the Mexican theme, here is a tasty little recipe  for some fish tacos as well.