I realize this is the third rhubarb recipe I have posted this season but who’s counting?! I actually adapted this idea from a trifle recipe. Although both parfaits and trifles are aesthetically pleasing desserts, they are not the same.

The word ‘trifle’ means something of little consequence or significance. In food terms, its anything but! A trifle is a custard and/or cream layered with fruit, placed over cake, that has been marinated in brandy or liqueur. Trifles are traditionally made in a large, deep glass bowl so you can see all the layers.

The French word ‘parfait’ means perfect and was originally made with layers of frozen custard, served in a tall glass. Currently, parfaits can simply have a yogurt base and topped with granola and fresh fruit. Though, originating from France, the parfait is now a world traveler with endless variations.

This turned out to be so good even if it was a bit time consuming.

Angel food cake is one of Brion’s absolute favorites. Its one of those iconic cakes that seems to have been around forever. The women of my mother’s generation seemed to have no problem baking this very tall, feather light cake from ‘scratch’. Fast forward to the present and all we have to do is buy a ready made mix, add some water and there you have it …. one big, lovely angel food cake.

Of course you can eat it plain or dress it up …. a blank canvas waiting for something interesting to happen! Did you know you can make a decadent whipped cream by using a can of coconut milk? Not only is the technique simple, but you can use it just like regular dairy whipped cream. Coconut whipped cream is a good choice for desserts, smoothies, over a bowl of fruit, on a pie or fruit crisp even pancakes.

The pairing of coconut cream with sugared kiwis, a sprinkling of blackberries and some angel food cake tastes amazing. For today’s blog, I’m using individual bundt pans. The recipe only makes four and is perfect for a summer evening.

The perfect pie for a summer evening. First off, if your not accustomed to using sour cream in a sweet pie filling you will probably cringe. My first encounter with this idea was many years ago and I’m still addicted.

Sour Cream has worked its way into many facets of my baking and cooking, so for me its a basic fridge staple. I know for some people it happens all too often … you pick up a container of sour cream to have on some tacos and then what to do with the rest before it spoils??

This pie recipe makes an extra deep dessert. It works well in a spring-form pan or a deep pie dish. The crunchy, buttery brown sugar streusel on top is lightly accented with cardamom spice & fresh lemon zest. It is the perfect foil to the lush, rich sour cream and raspberry filling.

I should mention, its best not to use light or fat-free sour cream. Another thing, is to bake the pie until the filling is set THEN top with the streusel and bake until golden. This is a pie that is best served cold or just slightly warm as it will not be firm enough to slice if it is hot.

Raspberries lovers … this one is for you!!

Frozen waffles are like having a blank canvas begging for you to add your personal touch to create something unique.

The little toaster waffles called Eggo’s popped up on the market in 1953. They were created by three brothers, Anthony, Sam & Frank Dorsa, who had previously been known for their mayo business that had took off in the 1930’s.

When Eggo’s first appeared on the freezer shelves in grocery stores, they had a totally different name … Froffles! It was meant to be a combination of frozen and waffles but it didn’t last long. The name was swapped out for Eggo waffles by 1955. This unique frozen breakfast item didn’t become truly popular until about 1968.

So if you like waffles and apple pie, this dessert should interest you.

The flavor of lime has not always been one that I have enjoyed. It always seemed to have an overall harsh characteristic about it. After we spent a few holidays in the Yucatan, Brion started using lime juice in his chicken soup and really enjoyed it. From there I swapped out the lemon juice for lime in our guacamole. Now here I am putting it in cheesecake. Who knew it could be that good!

A squeeze of lime juice is vital to many classic dishes. It’s the kick in a margarita, the spark that ignites many curries and the tart foil to sweetness in a host of desserts. Conveniently, for such an indispensable ingredient, limes are available year round.

Lime pairs well with apple, berries, cherry, ginger, papaya, plum and strawberry to name a few. Today, I’m using it in a cheesecake filling. It seems like a nice little dessert to start off the month of June.

The dessert name of Om Ali, means ‘Ali’s mother’, has its own story. To make a long story short, not wanting to bore you with the detailed war history of Om Ali ….. Ali’s mother, was a powerful feminist of the 13th century Egypt. Her husband tried to cheat on her so she kills him and celebrates with distributing Om Ali dessert declaring her son Ali as successor. As ever, food is a much more than just the act of cooking and eating. Food is culture, history and the stories of a given people and time.

You could think of Om Ali as the Egyptian cousin of bread pudding. Same idea of soaking some type of bread with milk or cream and sugar, then baking it in the oven. Om Ali skips the eggs though, which makes it lighter in texture, looser and milkier as opposed to custardy. Instead of bread, it is traditionally made with baked puff pastry, phyllo or Egyptian flat bread combined with milk and nuts.

Om Ali has become a well loved and celebrated dessert all over the Middle East, being served at many big celebrations and events.

Instead of using the traditional nuts, raisins and coconut, I’m using the ‘Sahale Snack Mix’ which has a very similar blend in my Om Ali pudding.

With Victoria Day week-end upon us, many people will be thinking of outdoor events. For some reason, food just tastes better when it is cooked over a campfire (or barbecue).

To date, no one seems to know who actually started toasting marshmallows on a stick, over a campfire. S’mores have been a camp tradition ever since the recipe first appeared in the 1927 edition of the Girl Scout Handbook. No doubt it was given its name ….. short for ‘some more’.

Since Brion & I are not inclined to go camping, I baked these in the oven. The orange peels infuse the chocolate with a fragrant, citrus flavor. Nice!

If you wish to bake these desserts over a campfire: 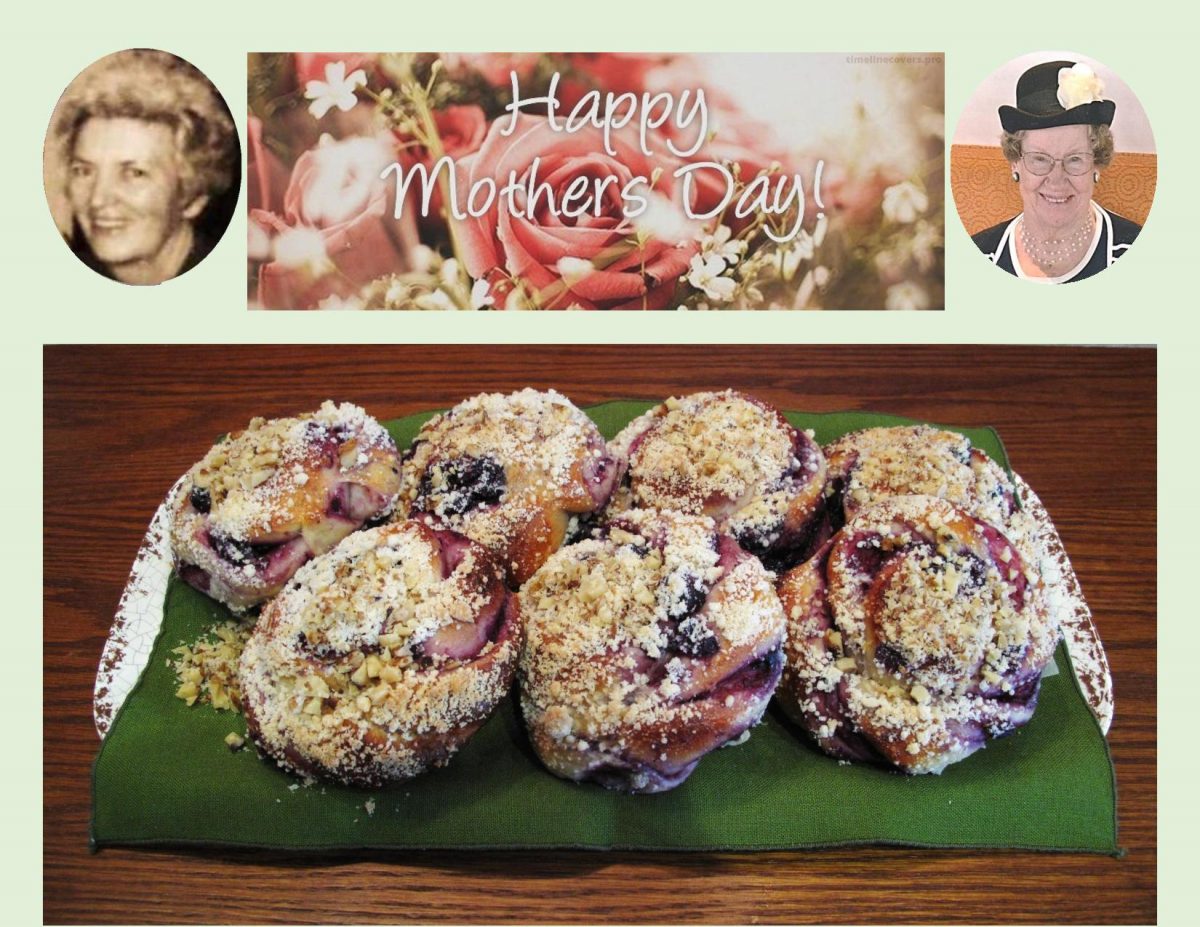 Today as we celebrate Mother’s Day, many special memories come to mind. My mother passed away in 1978 but even after 42 years, time has changed nothing. I still miss the sound of her voice, the wisdom in her advice, the stories of her life and just being in her presence. I miss her today as much as the day she left us and I always will.

It is also with very loving thoughts, I celebrate my mother-in-law, Dolores, for her loving and kind ways and for raising that ‘special’ man I love sharing my life with. Love to my sisters, who gave so much of themselves to be the great mom’s they are.

Babka ….. an old world beauty with roots in both the Jewish and Eastern European communities. A cake like, sweet yeast bread, richer than that of a cinnamon bun but not as rich as a Danish pastry. The name Babka means ‘little grandmother’ in many European languages.

Traditionally, babka was filled with seeds, nuts and sometimes even honey or filled with layers of cinnamon sugar or chocolate. This classic baked good has been making its way into every corner of the food world. A great babka dough is a blank canvas for almost any filling. Many other flavors have been developed and have become equally popular.

Fruit lovers can now indulge in apple-cinnamon or raspberry and apricot cream cheese babkas. There is also a Middle Eastern favorite using halva (sesame candy) or a completely savory version with sun-dried tomatoes.

This bread seems very fitting on our Mother’s Day blog.

This is a spring version of summertime fresh blueberry tarts. Even though we are a long way from blueberry season, nothing wrong with using some frozen ones. At our house we use a lot of lemons which means there are always lemon peels available. Candied lemon peel is an excellent way of using up the flavorful but not as tasty peel.

Candied or crystallized fruit, has been around since the 14th century as a method of food preservation. It seems to have started out in the Arab culture, being served at banquets. Candied fruit as a whole, would reach the west where they became the key part of some of the most well known cakes and breads of European tradition, such as Italian Panettone and German Stollen.

Candied lemon peels are a very versatile ingredient. Chopped up, they can be used in baked goods for a lemony flavor boost, whereas whole strips can be dipped in chocolate and used as an edible gift.

For my blueberry tarts, I thought some candied lemon curls would make a pretty garnish not to mention the additional flavor they give.

The quintessential Mexican ‘Conchas’ are a type of sweet roll topped with a cookie crust, shaped for it’s namesake, a seashell. Though its precise origin is not known, all conchas are made from an enriched, yeasted dough similar to brioche or challah. What isn’t really clear, is the point at which a baker decided to cover a small round of sweet dough with a thin layer of cookie dough and then bake it.

Traditionally, the bread roll itself is not flavored, but the cookie dough topping has either a vanilla or chocolate flavor. This topping is an essential element on the sweet roll but the color or the way it is scored or decorated can be done in many different ways. Sometimes, brown or white sugar or even colorful sprinkles are dusted over the topping.

Conchas are sometimes split in half horizontally and filled with anything from whipped cream, custard or even refried beans. Some bakeries have been experimenting with new concha flavors. Cinnamon, walnut, agave nectar with golden raisins and pecan flavor are some that have been introduced.

It seems that conchas are at their best when eaten fresh which makes good sense being made from a yeast dough. It’s going to be interesting to see if I can create some of these little conchas with such a mysterious past.