Stuffed cabbage is a humble food and probably originated , as most comfort food has, from leftovers. Common place in Russian, German, Irish, Hungarian and Slovakian cooking, cabbage is an ingredient that is filling and inexpensive.

Readily available, this cold season crop is the under-appreciated cousin of brussel sprouts. There’s nothing particularly mysterious, alluring or exotic about it. Cabbage’s distinctive odor might have something to do with its unpopularity. When cooked, it has a pungent and pervasive, slightly sour, sulfur-y smell.

All that aside, cabbage becomes buttery soft when cooked. This allows its wide and sturdy leaves to be used as wraps for soft fillings. Any type of ground meat can be used, seasoned with garlic, onions and spices. Additional ingredients may include rice, breadcrumbs, barley, eggs, dried fruit, nuts, veggies, dried or fresh mushrooms, etc. The ‘sauce’ for baking stuffed cabbage, varies widely by cuisine.

These cabbage rolls are the ‘full meal deal’, all rolled up in one …. corned beef, cabbage, mashed potatoes and cheese. Yum! 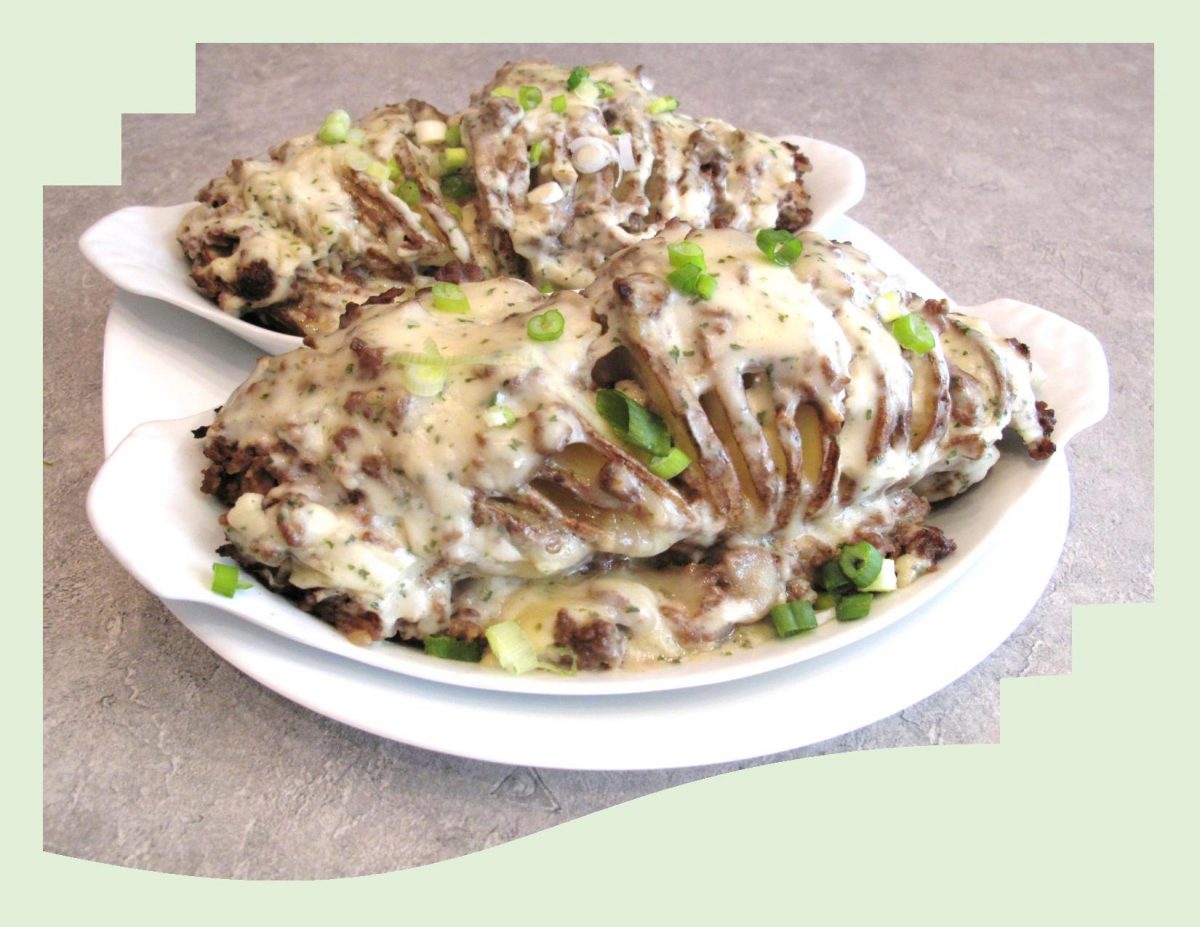 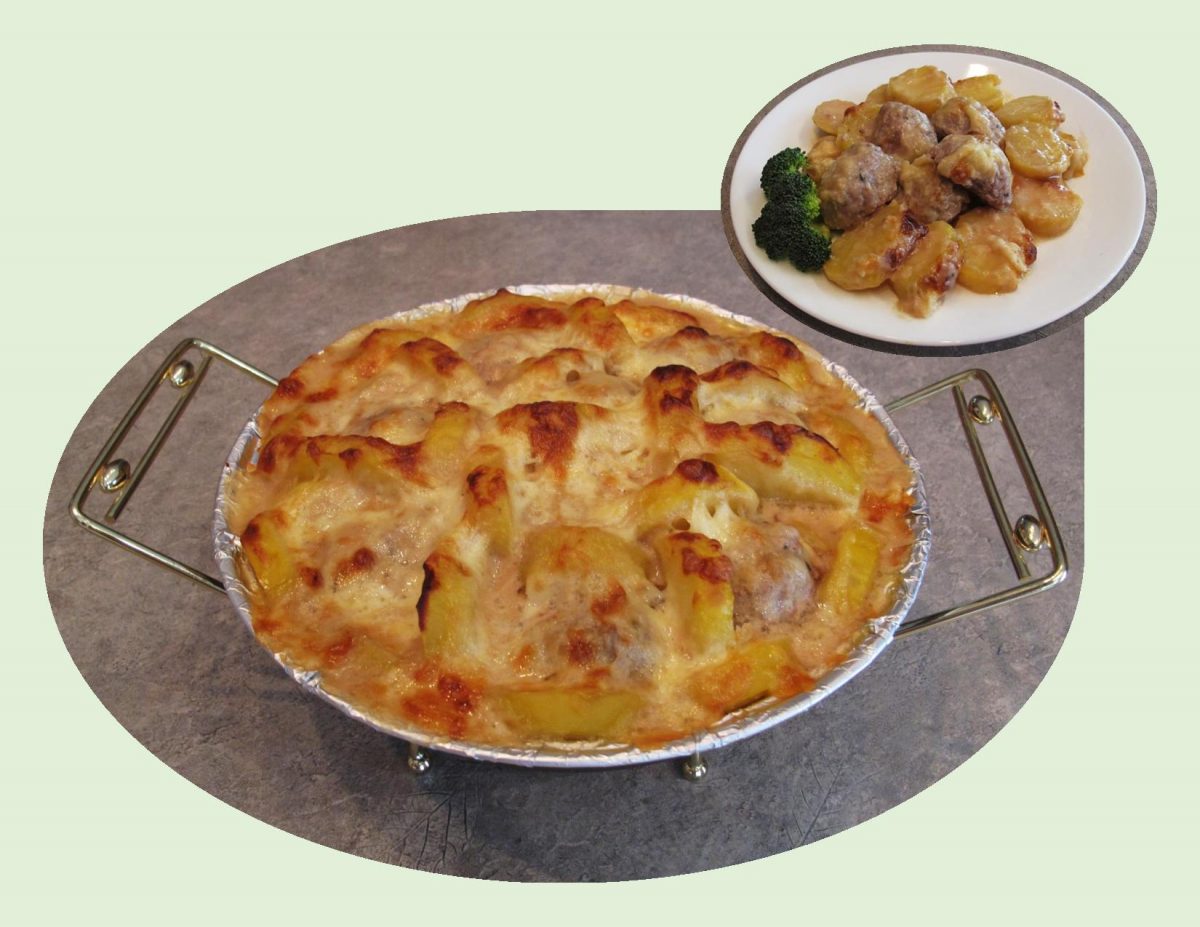 No doubt, since we have just finished the 2019 Christmas season, you enjoyed some Swedish meatball hors de ouvers. Personally, I love the little morsels so I thought it would be interesting to turn them into a main course casserole.

I have heard the question asked as to what the difference between Italian and Swedish meatballs is. First of all, the meat blend of ground beef, veal and pork are the main players in both styles. The difference comes in the ratio of each meat being used. While both varieties include ingredients such as minced onion and milk soaked bread or crumbs, the seasoning in these two iconic meatballs differs greatly. Swedish meatballs traditionally use spices such as allspice, nutmeg, white pepper and ginger while Italian calls for grated Parmesan, garlic, parsley, fennel seed and oregano.

Another ingredient that is most always used in Swedish meatballs is mashed potatoes. Size is important … Italian meatballs (other than in soup) are quite large whereas Swedish are generally like a hearty teaspoon full.

When it comes to sauce, this is a big part of the flavoring component that sets them apart. Swedish meatballs are cooked in a cream gravy made with beef broth whereas Italian meatballs are served in a tangy, bright red tomato sauce.

All that being said, it brings me back to my casserole. It combines all the ingredients of the Swedish meatballs put uniquely together in a casserole and topped with a mozzarella cheese. Perfect January meal!

‘Plov’ originated from Uzbekistan (a landlocked country in Central Asia), centuries ago. It has become known and loved throughout Central Asia as well as being a staple dish in Russia.. This meal differs according to the occasion: a wedding plov is the most magnificent, a holiday plov a bit less exotic and there is even an everyday plov. These vary both in cooking technique and ingredients. Traditionally, plov is made with mutton, rice, carrots and spices and involves three main stages.

There are over sixty different plov recipes in Uzbek cuisine. In every area it is cooked in a special way. To an experienced gourmet, it would be easy to recognize its origin from what I’ve read.

Time has changed and refined plov recipes with more ingredients being added. Plov is usually served on big ceramic or porcelain plates.

This turned out to be a very nice meal. As usual I always enjoy food history as much as trying the recipe. I hope you found the blog interesting and the plov tasty if you had a chance to try it.

With New Years Eve gatherings fast approaching, these little gems come to mind in the form of  hors ‘d’ oeuvres. Of course, they are always great for a main dish as well.

The Swedish word for meatball, ‘Kottbullar’, first appeared in print around 1754. They are traditional Swedish ‘old-world’ fare at Smorgasbords and other festive occasions. Initially Swedish meatballs were only enjoyed by upper class Swedes but the increased availability of wood stoves and meat grinders in the 1850’s made meatballs accessible to the middle class as well. In northern Scandinavian countries beef was considered a luxury item, which meant meatballs were highly prized.

The meat content can vary based on geography. In southern Sweden, they are most often a 50/50 mix of beef and pork whereas further north in Sweden 70/30 of beef to pork is typical. Likely other options would be veal, venison, lamb or moose. Size-wise, they are smaller than those of Italy or Germany, typically not larger than a golf ball or smaller than  3/4″(2.5 cm) across.

The cream gravy (sauce) and spices play a big part in the taste of this dish, traditionally served with lingonberry preserves, mashed potatoes and pickled cucumber salad. The ‘pressed cucumber’, as it is called, provides some crunch, saltiness and acidity to the sweet creaminess of the rest of the meal.

In America, Swedish meatballs were very popular in the beginning of the 20th century and again in the 1950’s-1960′.

Brion and I have always enjoyed these tasty little meatballs so we are having them as our main course meal today.

Stews have been an important food for most of the world’s people for thousands of years. They are wonderful concoctions, savored for their flavorful combinations as well as their reminders of home and family.

Geographical location plays a big role in how beef stews are made from different regions. In areas where the cold season is longer, the stew will usually be thicker in sauce, cooked longer and have heavier or more flavorful ingredients. In areas that have a warm climate, stews will be a lot spicier in flavor for inducing perspiration to cool the body.

The culinary history of both Canada and the United States includes numerous examples of stews brought by European settlers. Beef stews have been the most popular recipes among this legacy. In addition to being versatile in their ingredients, stews can also be used as filling for pastry shells, over mashed potatoes, rice or biscuits.

Brion and I have always enjoyed the combination of beef and barley. To my knowledge, the idea originated from the ‘Scotch Broth’ soup. In today’s particular stew the vegetables are roasted, using their natural sugars to caramelize, helping to create additional flavor in the stew. 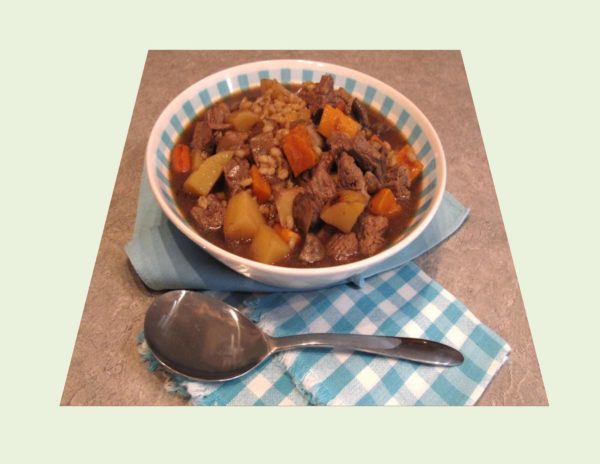