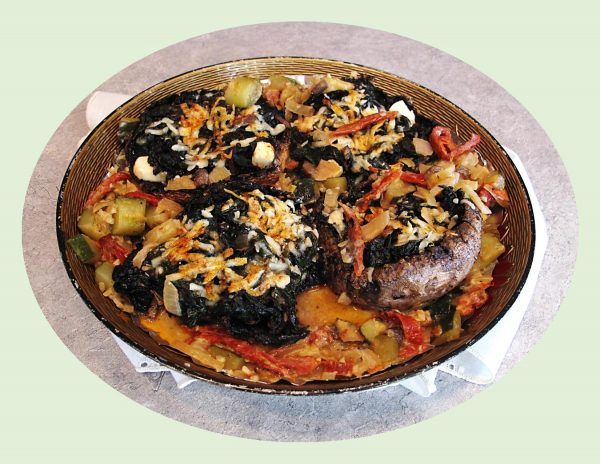 About six years ago, I tasted this popular French cake au jambon et aux olives for the first time.  The word ‘cake’ in France refers to a baked savory cake made with ham, olives and cheese. They are exclusively rectangular in shape and made in a bread pan. The texture is between a bread and a cake, making it it good for picnics, cubed as an appetizer with drinks or served with a soup or salad.

This savory cake/bread has endless possibilities when it comes to ingredients. Apart from the original ham, olives and cheese, you can use cooked chicken, sun-dried tomatoes, zucchini, mushrooms, sweet corn kernels, spinach or really any personal choice you have. Well wrapped, it will keep for a few days in the fridge, reheating it or just enjoying it cold.

In this recipe I used  a mix of black and green olives, ham, bacon and a Gruyere/mozzarella cheese combo. I decided to pair it with a Spanish omelette which complimented the savory bread well. The ‘cake’ I had the opportunity of trying the first time was made by a ‘very’ French lady. It set the bar high for my own to turn out as good. We loved it so I guess this recipe is a ‘keeper’.

When I think of stuffed peppers, quiche never ever came to mind. I have always enjoyed quiche anytime of day, with or without crust. The idea of using a pepper as your ‘crust’ certainly puts a new twist on the traditional quiche.

I wanted to make these pepper cups for a supper meal and since there was no pastry involved here, bread sticks seemed like a good accompaniment.

Quiche is like making pizza– there are no limits to what the filling can consist of. For our meal today, I just put together a variety of items I had on hand for both the quiche and bread stick twists. It turned out to be real enjoyable and so easy.