Plum Torte, a simple to make butter cake topped with Italian prune plums, vanilla, sugar and cinnamon baked in a spring-form pan.  New York Times food columnist Marian Burros was given a recipe for a plum torte soon after she married.  She published the recipe for the first time in 1983. The paper continued to run it for the remainder of the decade every single September, until one year they said enough is enough. But people noticed, and they were not happy. They sent angry letters demanding the recipe be reprinted. So, The Times printed it one more time, but with a note urging people to clip it out and laminate it inside their cupboard!

The beauty of this torte is that it doesn’t require plums to be delicious. You can substitute berries, peaches, pears, apples—most any fruit—fresh, canned, or frozen. The thing is, it’s so simple, that in spite of its hallowed status as an all-time favorite, I don’t see how you could forget this recipe!

The plum has enough tang to stay interesting in a sweet dessert, and it also tends to bake into a jammy, gooey texture.

Homespun desserts such as crisps, cobblers, betties, slumps & pandowdy’s are all variations on the same theme. As much as we like to be definitive, these old fashioned desserts are ‘folk-food’ passed down orally from mother to child and like all folk culture slight variations arise from kitchen to kitchen.

My spice drawer gets a good workout in the fall. I want to add fall spices to as many things as possible. Warm fruit desserts are a perfect candidate for doing just that.

The filling for this cobbler is a combination of peaches, brown sugar, butter and some added spices. All of that is cooked briefly to give it a caramel-like flavor. The topping is a simple one but the combination of spices adds such amazing flavor and is the perfect complement to the peaches. I’ve added cardamom to both the filling and topping. If you follow the blog, you are probably aware of my obsession with cardamom. Definitely feel free to use your favorite combination and ratio of spices.

I think this Chai-Spiced Peach Cobbler is everything you could ever want in a fall dessert.

‘Tis the season for fall flavors! Nature is offering an abundance of root vegetables such as carrots, parsnips, sweet potatoes and fruits to make use of in our fall baking.

Thinking about autumn can bring about some pleasant thoughts. While it is common to think about cozy scarves and pumpkin lattes, the symbolic meanings of autumn are more profound than you think. Ancient cultures, science and astrology have associated many aspects of this beautiful season to human life. These symbolic associations are powerful reminders that Mother Nature has an incredible influence on our lives.

These fall cookies are full of green zucchinis, deep orange carrots and bright red apples, colorful representations of the changing season ahead.

Although there are many myths about the origins of the ‘churro’, most people believe there are three realistic stories and in each of them, the original country of churros is different: Spain, China & Ancient Egypt.

First of all, if you are not familiar with churros, they are a sweet snack consisting of a strip of fried dough dusted with sugar or cinnamon and usually served with a small bowl of hot, thick chocolate. Brion & I tasted them for the first time when we were travelling in Spain in the winter of 2014.

The inventor of churros has often been researched, but the truth is that this dessert was created so many years ago, that only a whole country can be named when talking about its beginnings.

Although, today you can find numerous shapes for churros, the traditional one is from Spain, being a large, semi-circle of fried dough. This shape is actually very similar to horns of the ‘churra sheep’ that are native to the Iberian Peninsula.

The relationship between Churros and chocolate is almost inseparable, either in a cup or as a filling. However, this combination is not exclusive because Mexico, Philippines, Argentina & Chile all eat a different kind of churro. In Cuba they created the guava filled churros or eat them with ice cream in different flavors.

As per usual, I’m always looking for a way to have deep fried foods baked. I guess it stems from my many years of being in the commercial food service industry when it seemed everything was deep fried. I resist having to smell or eat anything that has to be fried in hot oil. That being said, here’s my take on a churro dessert that is baked and filling it with some strawberry cream cheese.

I have an obsession with rhubarb. I think because it is something I grew up with that makes it a nostalgic thing for me. Now, I’ll be the first to admit when it comes to rhubarb, my mind immediately jumps to desserts. But, over the years, I’m leaning more and more to using it in savory ways.

Tart and tangy, with just a little bit of sweet and spicy complexity, this rhubarb sauce is a unique and unexpected twist that is perfect served with coconut shrimp.

Brion & I love coconut shrimp which is really odd given that neither of us like coconut?? One of the nice things about this meal is that it takes minimal prep work but gives great results. We have tried many versions of sweet & spicy sauce with these shrimp and enjoyed them all. Today we’re experimenting with this savory rhubarb sauce. Should be good! 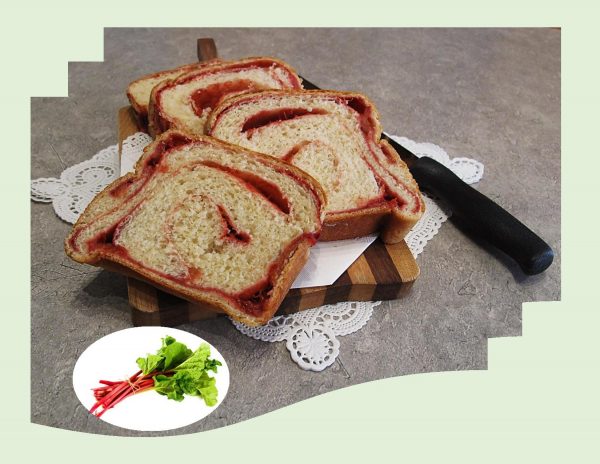 Plantains aren’t meant for eating right out of the peel, but they are transformed into a gently sweet dessert when caramelized.

It’s easy to confuse a plantain with a banana because they look so much alike. Both fruits come from the same family of plants. Though they look alike, the biggest differences between bananas and plantains is in their flavor profile, size, skin thickness and how they’re used in the kitchen.

Like bananas, they start green and progress to yellow and then a dark brown-black as they ripen. The darker they are, the sweeter they’ll be. Plantains can be eaten at any stage of ripening, but you’ll need a knife to peel them.

Plantains are starchier and usually larger and tougher than bananas, with a much thicker skin. Very versatile in that they can be boiled, baked or fried.

We grew to like plantains after our extended stay in Ecuador some years ago. Every so often they are a nice treat to have again.

The Caramilk chocolate bar is a Canadian creation that has been around since 1968. First produced at the Cadbury factory in Montreal then production moved to the Gladstone factory in Toronto in 1978 and has been made there ever since.

The general name for the candy confection is actually Cadbury Caramilk, but in the USA, this candy bar is more familiarly known as Caramello. The entire styling of the bar is different depending on where it is sold and this can lead to confusion that these are different candy bars when they are actually the same product. There are some variations in the recipe in different countries but the overall taste is remarkably similar.

There have been countless theories and debates about how Caramilk gets the soft flowing caramel inside the Caramilk bar. To date, it is still one of those Canadian enduring mysteries as Cadbury has guarded the Caramilk ‘secret’ for over 50 years.

These apple tart/baskets are certainly taken up a notch by simply adding a piece of Caramilk chocolate to the center. Who knew …. what’s old is new again!

Roly poly pudding also known as shirt sleeve pudding is a traditional British pudding. It was probably created in the early 19th century. The dessert was traditionally made with a ‘suet’ (hard animal fat) dough that was spread with jam and then rolled up and steamed or baked. It got the name ‘shirt sleeve‘ as it was steamed in an actual shirt sleeve.

The pudding is a nostalgic one for many British adults, as it was very popular 30-40 years ago as part of British school dinners, topped with a custard.

Today, roly poly is not only made with a jam filling but also with fresh fruit and served when one needs a comforting ‘retro‘ dessert.