Zucchini can be used as a canvas for so many combinations. Stuffed zucchini recipes usually contain ground meat, cheese, tomatoes, rice, spices, etc. I decided to take ours in a different direction today using bacon.

We enjoy zucchini in any form, not just when its in season but anytime. Its amazing how zucchini can be the perfect ingredient in so many recipes. Not all vegetables can take on so much. I’ve used it in just about everything I can think of from crispy fries, zoodles, desserts, breads, main dishes, etc. etc.

This stuffed zucchini meal was real good with steamed rice and roasted tomatoes.

Tourtiere is a traditional French Canadian meal enjoyed by many people throughout Canada. There is no one correct filling; the meat depends on what is regionally available. In coastal areas, fish such as salmon is commonly used, whereas pork, beef and game are often included inland. The name derives from the vessel in which it was originally cooked, a tourtiere.

While the smell and flavor are unique, they aren’t difficult to like. The flavors are ultimately simple and comforting and you probably have most of the ingredients on hand often. This galette version works perfect in my favorite basic cornmeal pastry crust. Tourtiere can be made ahead and frozen, then baked off as needed.

Apart from making tourtiere in the traditional form, try using the filling in tourtiere meatballs, phyllo rolls, burgers, turnovers or chicken tourtiere tartlets. The filling recipe I’m posting today comes from a tiny little pamphlet I probably have had for 30 years from a meat packing company. It has been one that I have worked with the spices to suit our taste.

Bacon wrapped shrimp is one of the most popular appetizers in culinary history dating back to the early 1940’s. Let’s face it …. bacon has a way of getting into our meals one way or another. Although shrimp prepared in this way are usually appetizers, there is no reason they can’t become the main course.

When done right, bacon wrapped shrimp make such such a great entrée. I find its important to partially cook the bacon before wrapping it around the shrimp. It takes 8-10 minutes to make juicy, flavorful shrimp in the oven. Baking bacon until crispy takes 15-20 minutes, so you need to give the bacon a head start.

Many recipes call for heavy seasoning with spices or sauces. Shrimp stuffed with Gorgonzola and wrapped in bacon need absolutely nothing else to be utterly delicious.

If you are not familiar with ‘Herbs de Provence‘, it is a mixture of dried herbs considered typical of the Provence region in Southeastern France. This region is known for endless vineyards, olive groves and its vibrant, purple lavender fields. Lavender is the herb that adds a distinctive scent as well as working beautifully with the rest of the herbs (thyme, marjoram, savory, oregano & rosemary) that make up this blend.

Prior to the commercialization of the product in the 1970’s, the person responsible for bringing the French phrase into the vocabulary of cooks around the world was non other than Julia Child (American-turned-French chef), who included it in a recipe in her classic cookbook ‘Mastering the Art of French Cooking‘.

This iconic French spice blend can easily elevate any number of meals. Like most spice blends, there is no set formula for the ideal Herbs de Provence. While it uses ingredients that are found in the North American creation known as ‘Italian Spice‘ (with the exception of basil), it also includes lavender flowers and has a strong floral taste.

Although I am using the individual herbs in this recipe, you can easily substitute with bottled, dried Herbs de Provence with no problem. They are readily available in the larger grocery stores. This makes such a great tasting meal …. well worth your time.

Quiche is one of those meals that appeals to me at any time of the year. The choice of ingredients is truly only limited to one’s imagination and what’s in your fridge or pantry. In this particular quiche, I opted to use bacon as my ‘crust’ since it was filled with vegetables.

I have been wanting to make some savory ‘madeleines’ for a while and think they will compliment this quiche well.

The madeleine or petite madeleine was first created in northeastern France in the Lorraine area. Technically — they are tea cakes, not cookies and are nothing like scones, very light, puffy and soft — not heavy at all.

Madeleines have a distinctive shell-like shape acquired from being baked in pans with shell-shaped depressions.

The appeal of them is how easy they are to make, how cute they are and how light and airy they are. And while they’re delicate and generally a sweet cake, madeleines hold up to having cheese and onion added to them as well. Many savory versions exist so I decided to go with a cheese madeleine today. 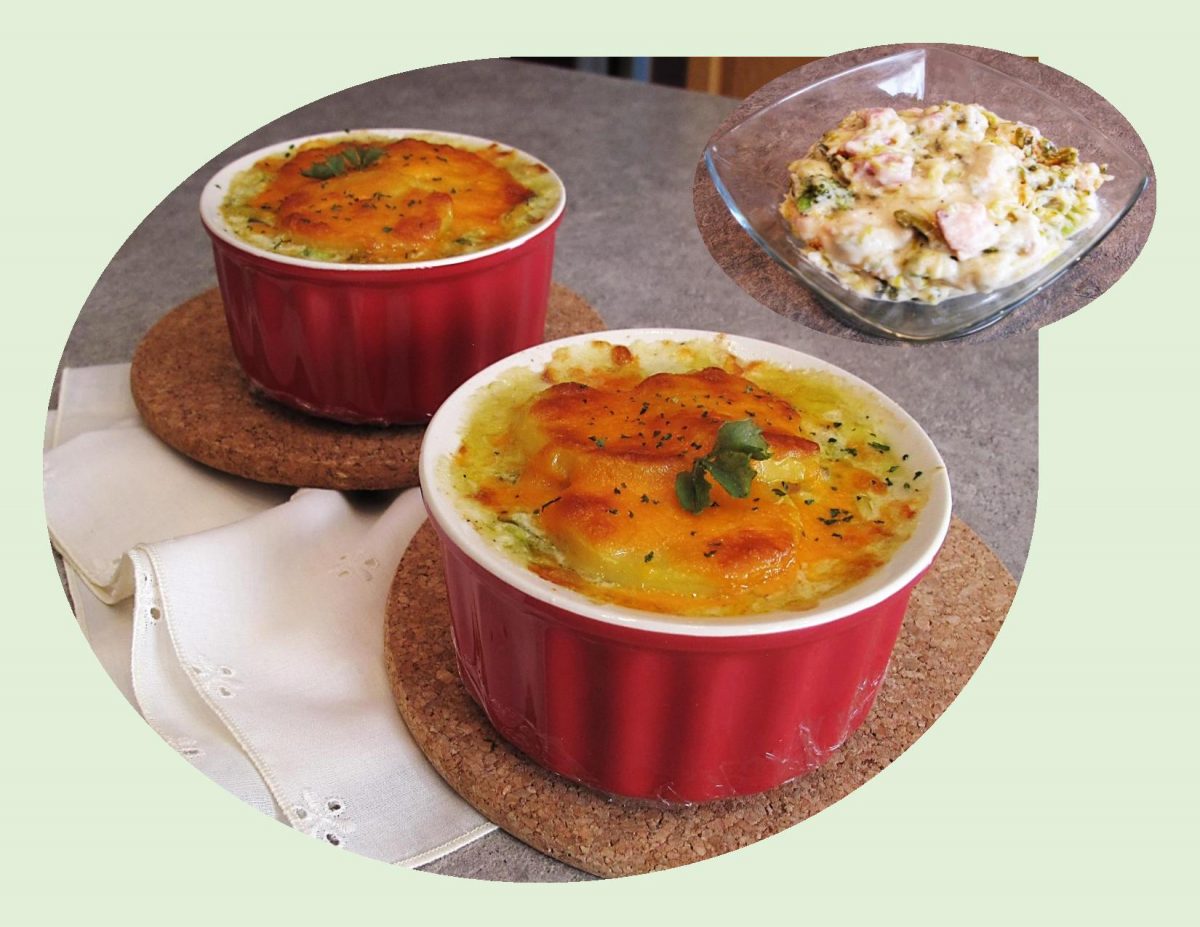 This English classic originated in small fishing villages as a way of using up the surplus catch. After poaching, baking then adding cream sauce and potatoes, the quality and the cut of fish used really doesn’t matter.

Like its cousin, the shepherd’s pie, fish pie is a comforting, homey affair of savory stew, topped with cheese laden mashed potatoes.

Traditional fish pie makes use of white fish such as cod, haddock and halibut. However, salmon and prawns can also be used. Vegetables such as mushrooms and leeks will help to make the pie even tastier.

I found, adding bacon to the filling made it a really flavorful meal. You know that expression ….. ‘bacon makes things better’!

For some of us, the best part of salads is everything but the greens! I have always had a hard time digesting lettuce so I’m never drawn to it when we get to salad season.

The idea of a full meal (lettuce-less) salad has always appealed to me. Of course there are many of these using a variety of ingredients. Probably one of the most popular was the taco salad. The earliest record of it dates back to the 1960’s with its predecessor being the small teacup-sized ‘Tacup’. It consisted of beef, beans, sour cream and cheese, served in a small ‘bowl’ made entirely of a Fritos tortilla.

The taco in a Tacup was invented by Charles Elmer Doolin, the founder of Fritos (tortilla chips). He created a device that looked like tongs but with two tart molds at the end of each tong. One mold would fit within the other mold with a tortilla sandwiched between them. The scalloped-edged shell was the dipped into hot oil. Holes in the bottom mold exposed the tortilla to the hot oil, enabling it to cook evenly.

Tacups were first served in Dallas, Texas in the early 1950’s and by 1955, he was selling them in Fritos’ flagship restaurant, ‘Casa de Fritos’, at Disneyland in Anaheim, California. It became popular enough that the Tacup was made bigger and served as a full, main-dish sized salad bowl.

Today’s salad is a satisfying meal (without a shred of lettuce) served in an edible tortilla bowl.

It seems the cauliflower craze has managed to last longer than just about any other that’s come before it. A total superstar when it comes to all the popular diets currently on everyone’s radar, including keto, paleo & whole 30. All signs point to cauliflower becoming the longest lasting food trend of all time.

Cauliflower ….. a naturally gluten-free food that just requires heavy seasoning, is healthy, versatile and ‘tasteless’. Its an entirely blank canvas for all your cooking needs because you can make it taste like ‘anything’ you want.

Last summer, Brion & I stopped for lunch at a popular take-out restaurant. He decided to try their much advertised ‘plant-based burger’. He was not impressed. Let’s say … it was not as advertised!!

In a previous blog, a while back, I had made cauliflower pizza crust and we had really enjoyed it. So today I am making meatballs stuffed with cauliflower in a cauliflower cheese sauce. I guess, this is my version of a ‘plant-based meatball’. Hopefully that works out better.