Beef barley soup is a classic old-world dish, and it’s been simmering away in pots for centuries, probably as long as people have been making soup. It just makes sense ~ the little white pearls of barley add lovely texture, as well as extra nutrition and satisfying bulk, all important things when you’re trying to make dinner out of a pot of soup. For an added bonus, barley’s natural starch thickens the soup as it cooks.

Beef Barley Soup is classic comfort food that you can make on the stove or in the crock pot. The soup has roots in the Jewish communities of Eastern Europe. Mushrooms were popular in these cold-weather countries because they could be harvested, dried, and stored for later use.

Barley was also plentiful and easy to grow in the Eastern European climate, making it a common addition to hearty winter dishes like soup. Barley’s history goes back even further; in fact, it is arguably the world’s first and most ancient, cultivated grain.

As far as the meatballs, texture can be an issue. If the meatball is too wet, it will disintegrate when cooking in soups. If it is too dry, it will lose its flavor and potentially break up into pieces. Using the right amount of liquid or eggs for the mix to keep them moist, but equally so, enough breadcrumbs or flour to bind them adequately. Remember, you can never get enough seasoning, so don’t be gentle with it, and use spices and herbs liberally.

One of Brion’s favorite soups has always been mushroom beef barley, so now seems a good time to make some. 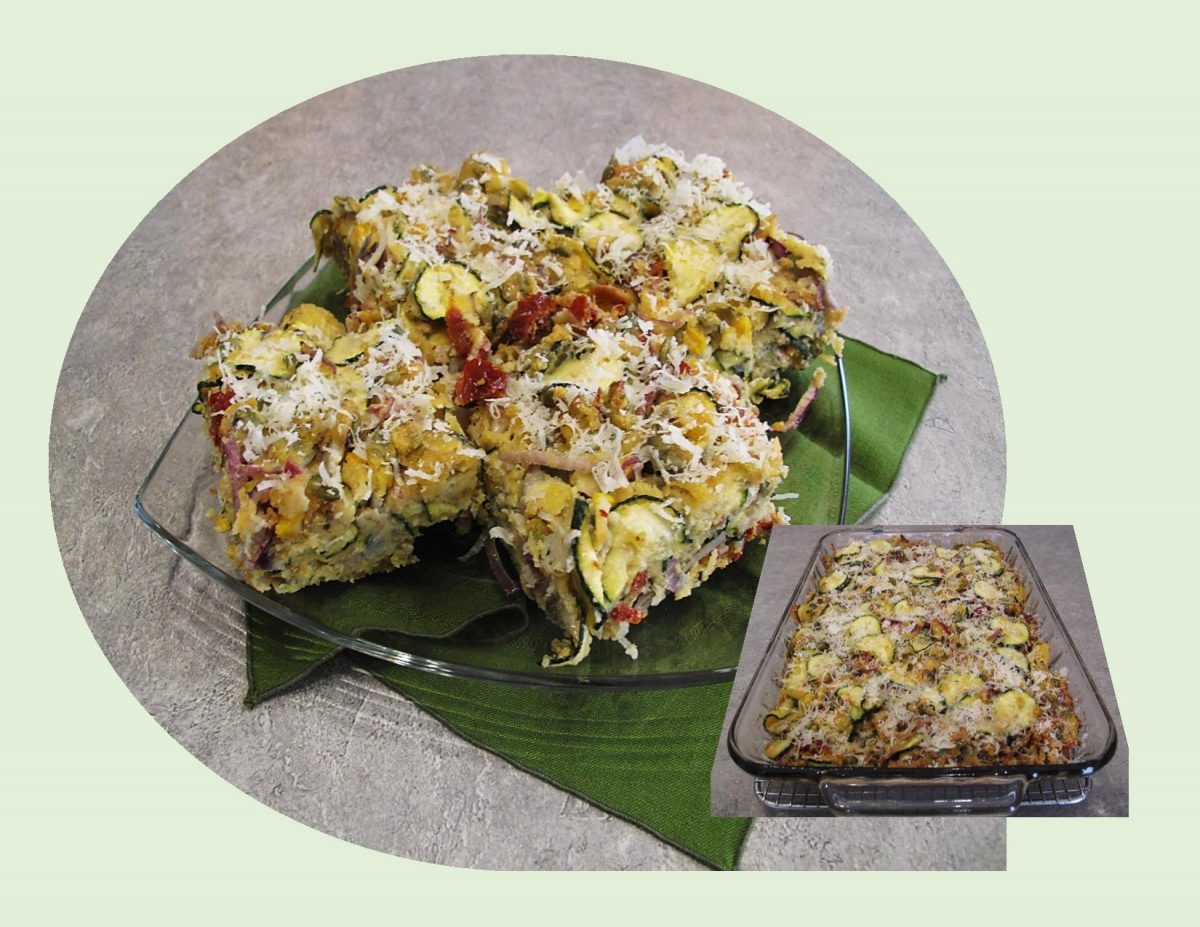 Scarpaccia is a savory zucchini tart originating from the northern coast of Tuscany. There are two versions: savory from the town of Camaiore, and sweet from Viareggio. It’s name roughly translates to ‘old shoe’, the reason being twofold; first it bakes up as thin as the sole of a shoe and second, much like a bad shoe that has been worn by many, this tart can be made with a variety of ingredients.  Scarpaccia was typically considered a spring time specialty that sailors made with their garden vegetables which included zucchinis and their blossoms.  The dish was served warm or at room temperature and enjoyed at the end of a meal (because of its slight sweetness), or a snack food paired with white wine or prosecco. The dish was made by folding zucchini into a simple batter of flour, eggs, olive oil and sugar or honey, then spreading the mixture into a baking sheet and cooking until golden and crisp.

The recipe has evolved to incorporate seasonal vegetables and herbs along with variations on the type of flour used allowing for its enjoyment year-round.  It can be eaten for dessert, as a great brunch dish or the main course when paired with a salad.

Every region in Italy has its own specialties, some shared by other regions but with different names. Scarpaccia can be made sweet or savory, thin or thick, crisp or soft – as long as the common ingredients of zucchini and flour are used. Zucchini … what a treasure!

In 1974, the first Monday of August was made an official provincial holiday to recognize and celebrate the varied cultural heritage of Albertans. Businesses can chose whether or not to recognize the day as a general holiday, which most do.

The Heritage Festival held in our city of Edmonton, Alberta Canada is a three-day event to sample delicious food, see creative performances and celebrate Canada’s multiculturalism. Thousands of visitors come to enjoy the tastes, smells and sounds of different nations around the world.

Even though many people will take in the day’s events and cultural food at the festival, some chose to pack a picnic lunch and take a drive somewhere just to relax.

I am posting a summer veggie & shrimp pizza that should work real well with that idea. 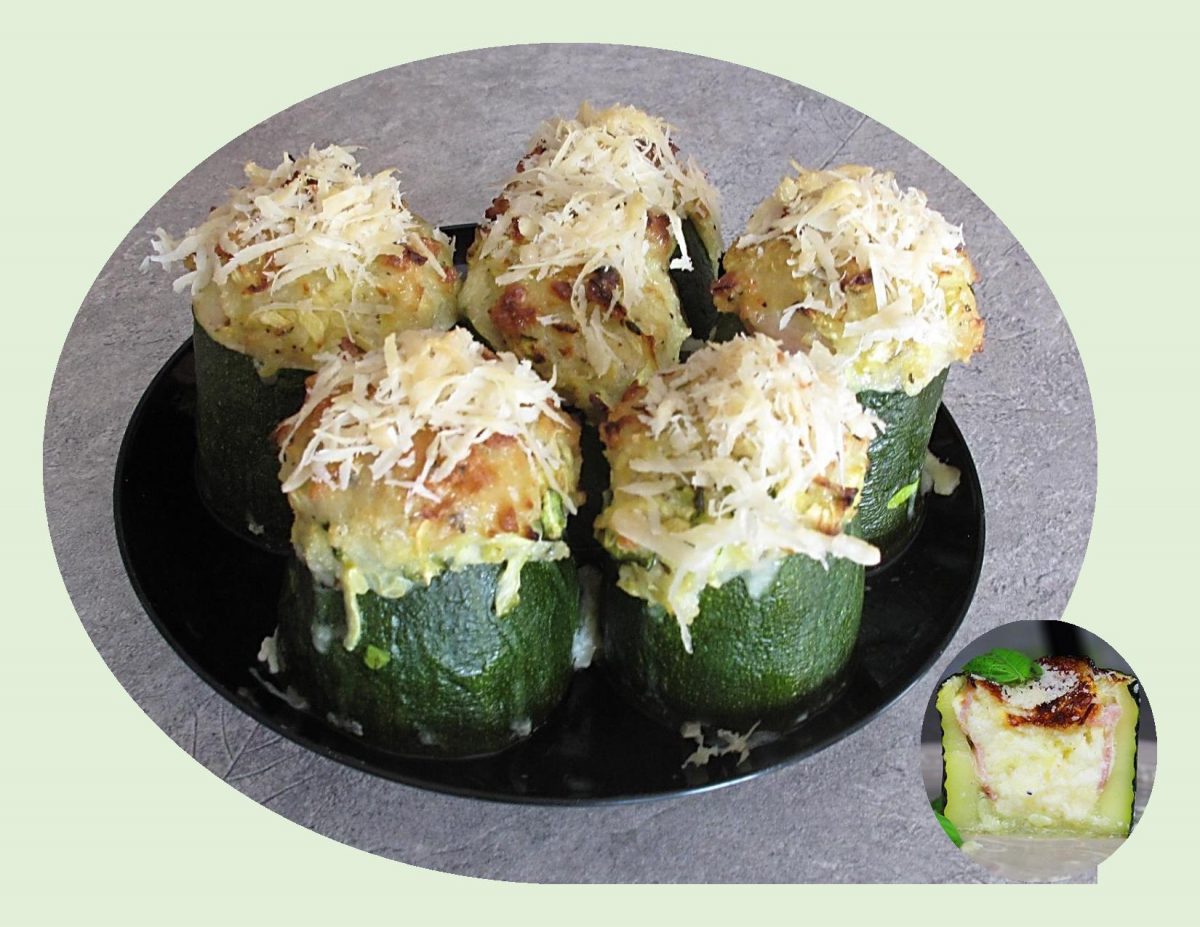 Zucchini can be used as a canvas for so many combinations. Stuffed zucchini recipes usually contain ground meat, cheese, tomatoes, rice, spices, etc. I decided to take ours in a different direction today using bacon.

We enjoy zucchini in any form, not just when its in season but anytime. Its amazing how zucchini can be the perfect ingredient in so many recipes. Not all vegetables can take on so much. I’ve used it in just about everything I can think of from crispy fries, zoodles, desserts, breads, main dishes, etc. etc.

This stuffed zucchini meal was real good with steamed rice and roasted tomatoes.

Scallops are an exquisite delicacy brought to us by the sea. Subtle as their flavors may be, the combination of sweet, buttery and nutty always hits the right spot and makes them so addictive.

Wild scallops feed by filtering microscopic plankton from the water. They are hand shucked immediately and frozen at sea to capture their fresh sweet flavor.

Brion & I don’t have scallops often but when we do we enjoy them to the fullest. 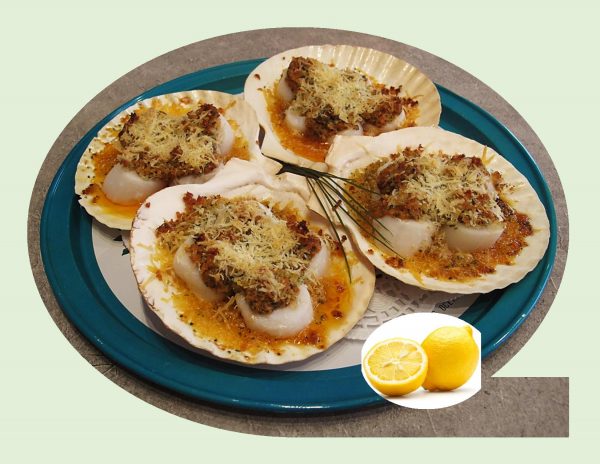 According to writer Mark Twain, ‘cauliflower is nothing but cabbage with a college education’. This uniquely versatile veggie has graduated above its many cousins, …. broccoli, brussels sprouts, cabbage, collards, kale and kohlrabi to become the sophisticate darling of the species. Delicious raw, fried, grilled, pickled, riced, roasted, steamed or sautéed.

Cauliflower ‘rice’ came on the scene as a popular grain-free alternative to rice. As with many food trends, the ‘riced’ craze has continued using other veggies like sweet potatoes, broccoli, carrots, onions, and peas.

Making your own riced vegetables is even easier than in days gone by. Just trim, chop and pulse your veggies in a food processor. Cook with a quick steam or sauté and flavor with some fresh herbs and spices. Of course, you can always change it up with other chopped veggies, nuts, or a sprinkle of cheese.

Riced cauliflower makes an interesting pizza crust. A different texture than the traditional bread dough crust but loaded with flavor. It’s sort of firm, chewy and soft all at the same time. I had tried this idea some years ago and we quite liked it so why not try it with a different topping and have it again!

It appears that ‘Portobello’ was the original name invented but from what I understand there is no right spelling …. Portabella, Portobella??

The mushrooms cap can be up to 6-inches wide (15 cm). Some will have smooth caps while others will have caps that slightly wrinkled.

This savory casserole combines sautéed Portobello mushroom slices, onion & egg noodles and is topped off with a buttery crumb mixture and Parmesan cheese. Brion & I really enjoy the rich, strong flavor you get from Portobello mushrooms so I think this casserole will be a keeper! 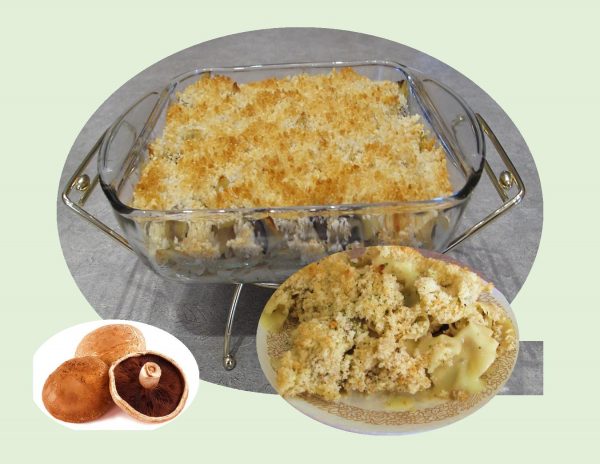 Some years ago I started using leeks and have never looked back since. Brion & I have never tired of that subtle flavor. When a recipe calls for leeks, it usually indicates to use the white and light green parts only and to either discard the ‘tough dark green tops’ or save them for another use.

So what are these ‘other uses’? Usually it refers to using the green tops as add-ins for soups or stock, only to be removed once they have imparted their wonderful layer of flavor and discarded.

When you think about it, we cook up all kinds of vegetables that are ‘tough’ to start out with yet end up nice and tender when cooked or braised. I find, using the dark green tops presents no issues, just cook them a bit longer than the tender leaves.

On the other hand, you can braise the dark green tops with some butter/olive oil, chicken or veg stock, minced garlic, dried chili flakes, salt & pepper & some lemon juice and make a great side dish to serve with fish or pasta etc.

Quiche, the great savory dish that originated in Germany, was perfected by French cooks who went on to create one of the most popular quiche in the world called the quiche Lorraine. Since then, many new variants of the quiche have been added. But all of those creative modifications involved mainly the filling, and the crust had that same nice and familiar, but plain taste. For that reason, many cooks didn’t bother with the crust dough preparation; instead they would buy good frozen puff pastry and concentrate on the filling.

Enter the unique mushroom crust quiche! To my knowledge, the first publication of the recipe was in the mid 1970’s in ‘Sunset’s Favorite Recipes’ cookbook magazine. The main advantage of this recipe is that the mushroom crust is nice and light as well as it goes with almost any quiche filling.

For a crunchier crust, use wheat thins instead of saltines, regular onions instead of green or change up the spices. Use your choice of cheese, instead of Swiss go with Monterey Jack, gruyere, Jarlsberg or cheddar. Add bacon, sausage or some pulled turkey as I did. Of course, nothing wrong with just using veggies and cheese …. endless possibilities!

Food history is full of surprises. The history of meatloaf, a North American staple, offers more than a trip down culinary lane. It provides a glimpse into how advances in technology have shaped the way we eat and prepare food today.

It turns out, the idea of mixing meat with a tenderizing filler traces back to the 4th & 5th century AD, when a Roman cookbook presented a recipe for patties made of chopped meat, bread & wine. But it wasn’t until the late 1800’s that American meatloaf was born, inspired by recipes offered by manufactures of the newly invented meat grinder.

In the 1940’s, WWII rationing spawned meat-free loaves, whereas postwar creativity in the 1950’s & ’60’s produced the likes of Bacon-Dill Meatloaf. In the 1970’s & ’80’s, veal, pork & beef ‘meatloaf mix’ came into vogue. In the 1990’s, restaurateurs marketed upscale versions and today, innovations continue as loaves are stuffed, wrapped or laced with international flavors.

When we cook meatloaf, we’re connected to something bigger: a tradition, a time line. Meatloaf is elemental. It’s enduring, served without undue fuss or expensive implements …. comfort food without a doubt.