When it comes to making meringue, simple ingredients and instructions can lull you into thinking preparation is quick and easy. Make it once under the wrong conditions, however, and you may quickly change your mind.

Meringue is temperamental. Getting it right can be a tricky process. Weeping meringues aren’t very pretty. The meringue pulls back from the crust, moisture beads on the topping, and a clear liquid forms below the crust. It doesn’t hurt the pie but it’s not presentable.

Years ago, when I worked in the commercial food industry, I started using the idea of adding cornstarch to meringue to help stabilize it. Cornstarch is especially helpful in hot, humid weather when a meringue is most likely to absorb extra moisture.

The science behind this ‘secret ingredient‘ is that cornstarch is composed of long molecules that it is believed insert themselves between egg white proteins to prevent them from clotting too much while meringue is baking. Corn starch molecules also provide more hold for meringue. It will be easier to cut and is less likely to weep.

Brion & I are not crazy about meringue but do enjoy it for a treat once in a while. 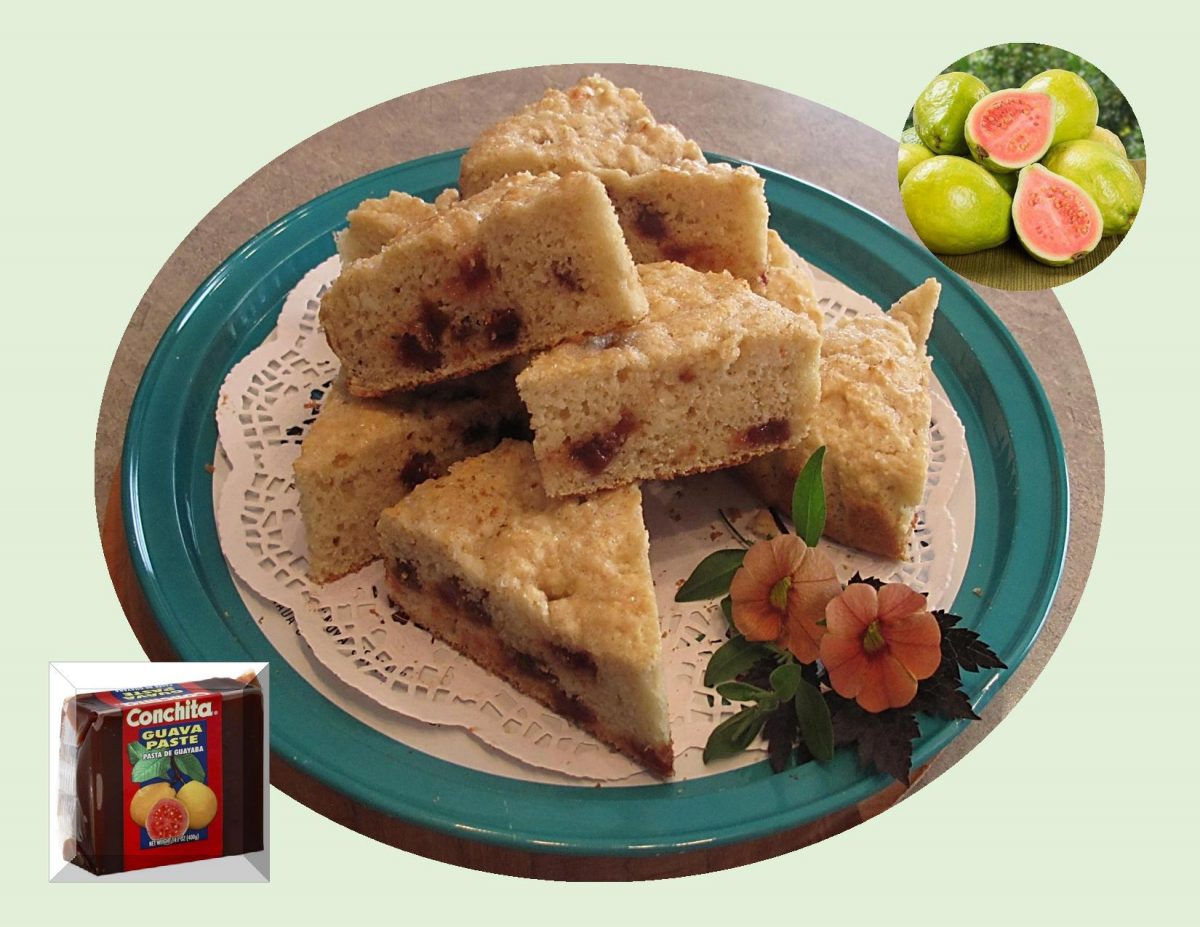 Over the years, I have used guava paste numerous times. I found it was equally as good in both sweet and savory preparations, adding a nice ‘zing’ due to the natural acidity in guava fruit.

This specialty ingredient is made by cooking together guava fruit and sugar until it is very, very thick and then leaving the mixture to dry to remove excess moisture. This results in a paste that keeps well and is very flavorful. Guava paste is typically sold in short, wide cans or plastic packaging.

Guava paste is an ingredient found in many Cuban, Caribbean and South American recipes. A common pairing with cheese as an appetizer or baked into pastries as part of the filling. Also known as goiabada or pasta de guayaba, has a sweet, floral taste lending a distinct and tropical flavor to anything it is used in.

Today, I’m using it in some scones with cream cheese. Should be good!

Saskatoon berries are very high on my list of nostalgic memories from my childhood. How these little berries can evoke such a flood of treasured thoughts is amazing. Our family farm was located in Southern Alberta, (Canada). If you were to stand on our farmhouse, west veranda, the sight of the ‘foothills’ came into view (foothills are an upland area that flank the eastern side of the Rocky Mountains).

How wonderful it was to be able to pack a picnic lunch on a Sunday afternoon and be able to drive there. It was like a whole different world. A landscape of long ridges and rolling hills covered in native lodgepole pine, aspens and spruce trees. The small streams wound their way through meadows of dwarf birch, willow and prairie grasses. You could easily come across some of the beautiful wildlife such as elk, moose or deer that lived there.

This is where our family would go to pick saskatoon berries. Very often we were accompanied by family friends or relatives. It was such a great time, everyone picking berries together, eating Mom’s fabulous fried chicken and potato salad (etc. etc.) for our picnic lunch. I was looking at some pictures from those times. We must have had some hot dogs on one occasion and I burnt my mouth it seems. What priceless memories!

With ‘saskatoon season’ in full swing, Brion and I thought it would be great to pick our own this year. It certainly can’t get any fresher than that. We chose the U-Pick farm called GROVE BERRY PATCH. This is a family owned and operated farm with 20 acres of saskatoon berries and 1 acre of raspberries, black currants, highbush cranberries and vegetables. They are located 1.5 km south off Highway 16A on Spruce Valley Road, Spruce Grove, Alberta, Canada.

It was such a nice little adventure. The morning was beautiful and the atmosphere of the berry farm and its family owners was very enjoyable. We picked a pail full of gorgeous saskatoons in a short space of time. I had originally started out with thinking I would post one recipe but of course, its turns out to be three. They consist of some Saskatoon Rhubarb Tarts, Saskatoon Butter Tarts and some Saskatoon Cream Cheese Tarts. Yum!

We are adding a few pics, not only of the tarts but some from the berry farm as well as a couple from my childhood days. Hope you enjoy the blog. 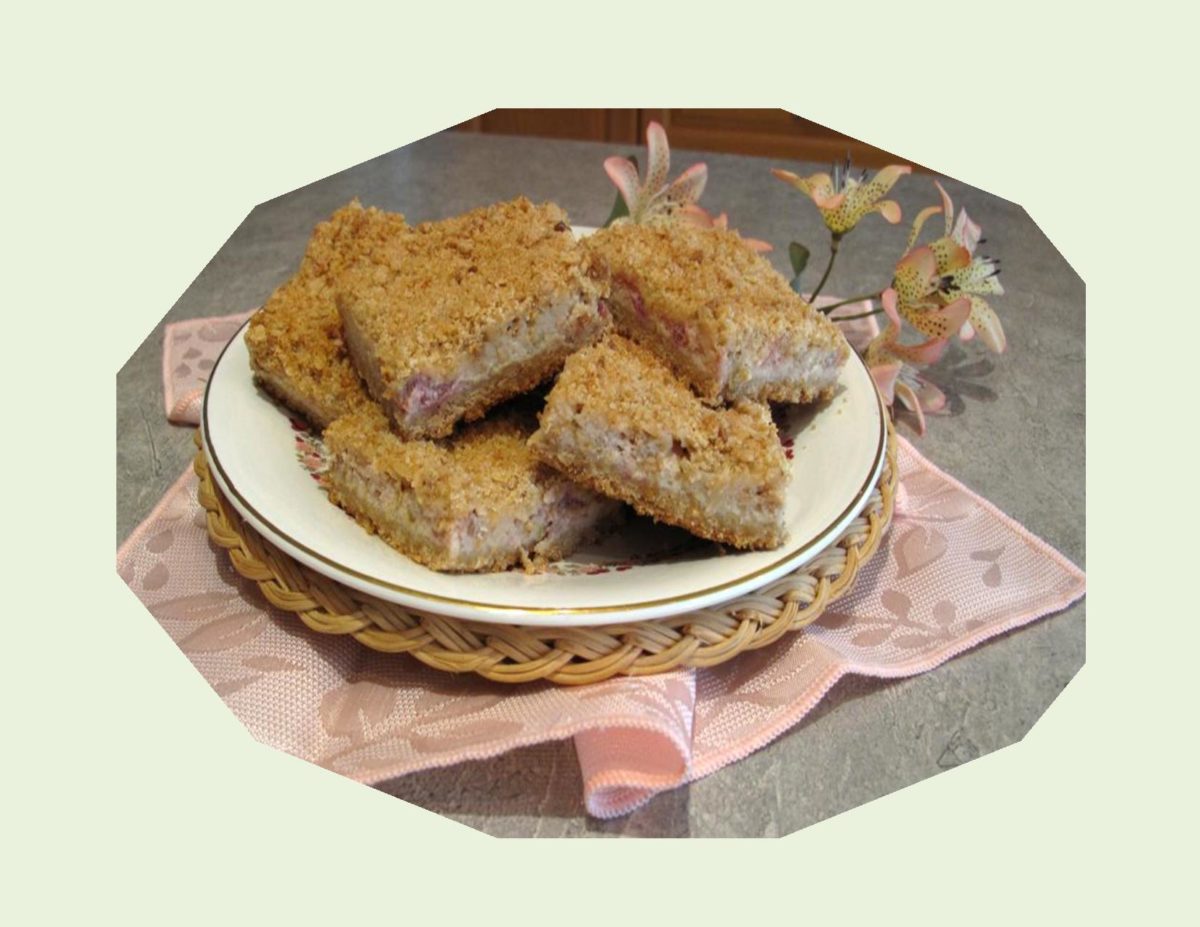 The thought of rhubarb is a nostalgic thing for me. I have memories of my mother’s neat row of rhubarb plants growing along the edge of her garden. Magically each spring they would reappear from what had been frozen ground only a few short weeks before. While other plants still lay dormant, the large fan shaped rhubarb leaves quickly gathered enough sunlight to produce some juicy stalks.

Tucked in behind the water fountain, in Brion and my flower garden, are three rhubarb plants. Originally we had put them there to show off that huge foliage as well as being used in my cooking. Time has passed and with our trees becoming more mature, they are getting more shade than they like. Nevertheless, last year they were still producing in late September.

I’m going to start off this season with some RHUBARB CHEESECAKE SQUARES,  a favorite recipe that comes from tasteofhome.com

Crisp or crumble, call it what you like, its just simply good to me. I think, over the years, I have made fruit crumble in just about every flavor and shape possible.

Crumbles became popular in Britain during WWII when crumble topping was an economical alternative to pie due to shortages of pastry ingredients. Other ingredients such as breadcrumbs or oatmeal helped further reduce the use of rationed flour, fat and sugar.

Crumble cakes can be made either sweet or savory. The sweet variety usually will contain fruit topped with a crumbly mixture of butter, flour and sugar. With the savory version, meat, vegetables and a sauce make up the the filling with cheese replacing the sugar in the crumble mix. The crumble is then baked until the topping is crisp. Generally the sweet dessert is served with custard or ice cream and the savory variety with accompanying vegetables.

Fruits that are commonly used in making crumble include apples, blueberries, peaches, rhubarb and plums or a combination of two or more. Due to its simplicity, this dish has remained popular over the years.

The MINI FRUIT CRUMBLE CAKES  I made for today’s blog were made with various kinds of preserves but you can prepare your own fruit for the filling or simply use canned pie filling — your choice! 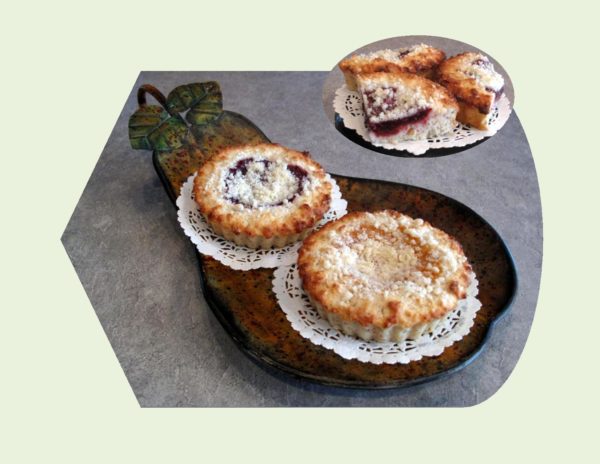 Eostre is an obscure Germanic and Anglo-Saxon goddess of spring and dawn, and it is thought to be the namesake of the Christian holiday Easter. Because food has always had a close association with Easter, special dishes were cooked in her honor. Most important of these was a small spiced, sweet bun from which our ‘hot cross bun’ derives. These little spiced buns are a rather old English tradition, which are still traditionally eaten on Good Friday. They are marked on top with a cross which is of ancient origin connected with religious offerings of bread.

Hot Cross ‘Scones’ are an easy take on the seasonal classic bun. They are the best of both worlds; hot cross yeasted buns and a tender spicy scone. Scones work for me in the way that most of the time I have the ingredients on hand and they only take about twenty minutes or so to make.

As always, I enjoy the idea of variation in just about everything. I had three scone recipes in mind for today’s blog. One recipe is a hot cross scone made by changing out the regular flour for ‘Kamut’ flour. This flour is made from an ancient grain originally grown by the pharaohs of Egypt. It contains more protein, minerals and other nutrients than modern wheat.

The other two recipes are Spiced Orange & Fresh Apple Hot Cross Scones,  both made with a sour cream batter. Hopefully they will become part of your Easter recipe collection.