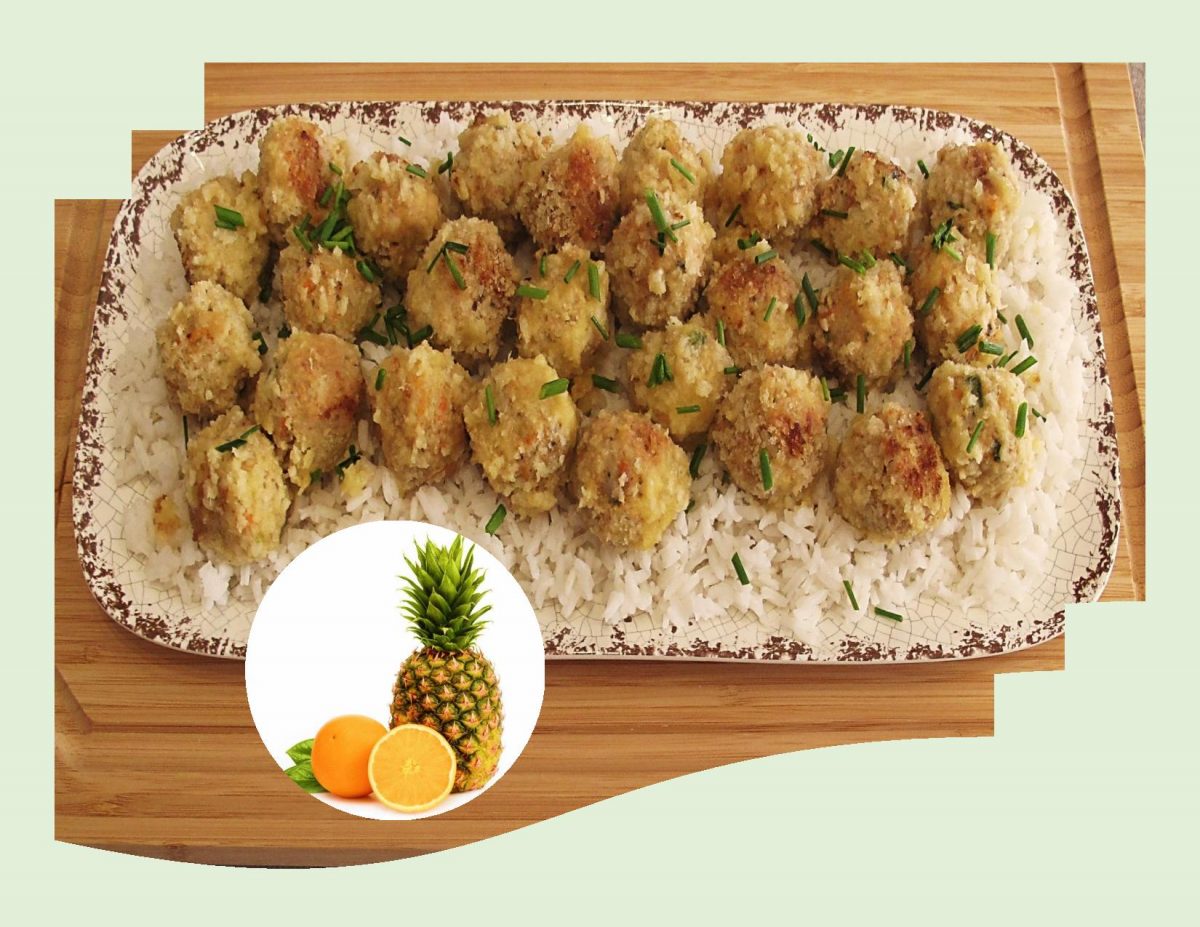 Salmon croquettes are basically a version of a salmon cake, salmon balls or patties and can be fried or baked. They were originally made of beef, probably leftovers that needed to be used up. Croquettes originated in France in about 1898 by the founder of classical French cuisine, Escoffier. As Escoffier’s chefs started to travel throughout the world, they took the recipe with them to other cultures where it was transformed based on local cuisines. From the original beef croquette, it branched out into salmon croquettes, chicken, vegetarian, and many other versions.

There are many variations of ‘croquettes‘ on the market, and just about every culture has developed their own recipe. Constantly, new recipes are formulated and something new is invented and created. With the input of different cultures, the original recipe has taken itself into many directions, different applications and ingredients. Very often salmon croquettes (cakes, balls or patties) are made with canned salmon though there are quite a few newer recipes that use fresh salmon that has been either chopped finely or ground to mold into the various shapes.

I think, using a zesty orange-pineapple glaze is the perfect compliment to these baked salmon balls. 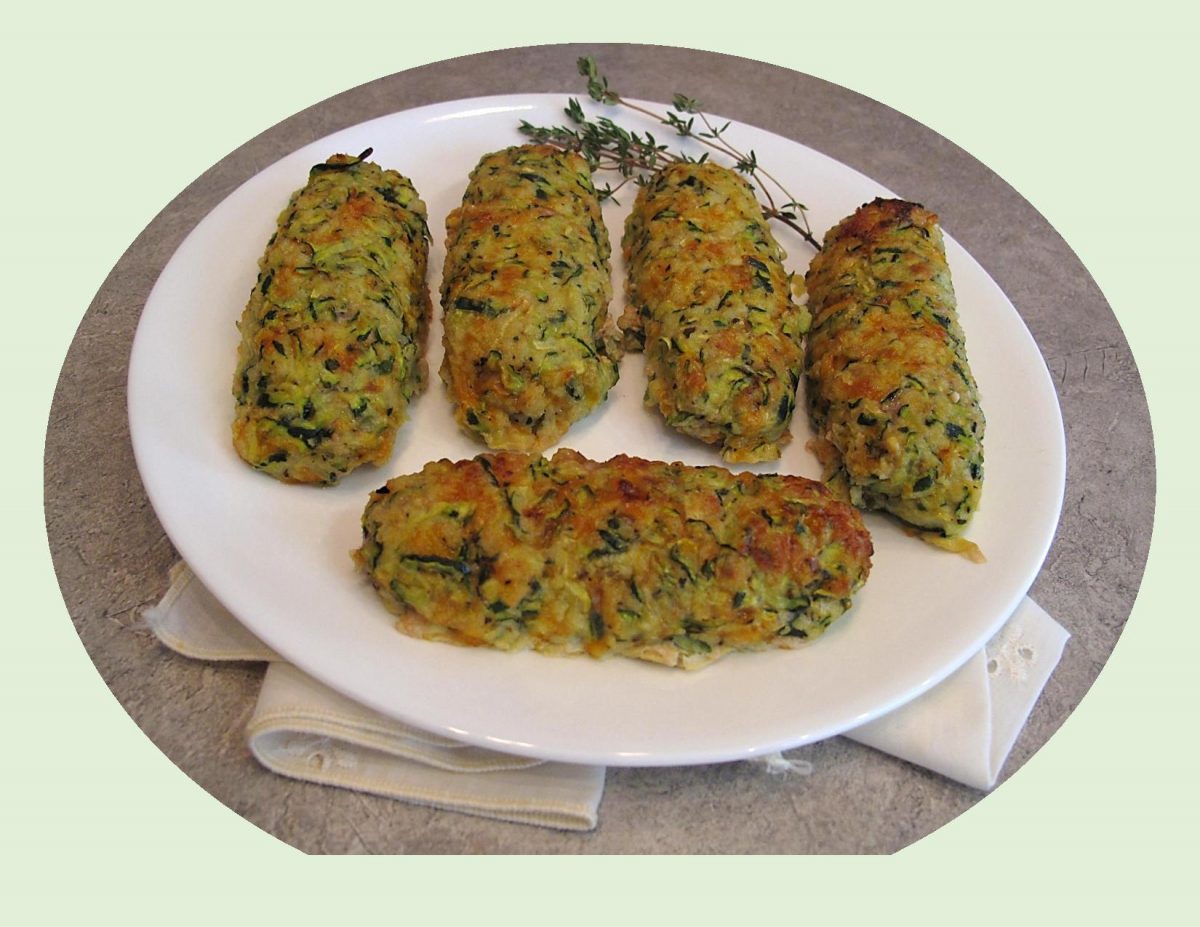 Versatile & plentiful, zucchini has endless applications. To mention a ‘few’, we’ve made zucchini bread & muffins, noodles, roasted it and put it on kabobs with chicken. It’s used in curry, ratatouille, stir fry and relish, etc. etc. etc. But just when I think there’s nothing I can do different with it, another idea pops into my head.

Among the family of sausages there is perhaps none so beloved in North America as the bratwurst. There are many interpretations of bratwurst, with variations on texture, flavor, size and cooking methods. Traditional bratwurst, which is German in origin, is made with pork & veal. Turkey bratwurst is a popular alternative to this traditional kind because of its low fat content.

For this recipe, I combine ground turkey with a combination of ‘German’ bratwurst spices and formed them into long sausage shapes. The shredded zucchini/cheese ‘crust’ is wrapped around each sausage and baked. All the flavors blended so well, creating yet one more use for zucchini!

Here on the Canadian prairies we have a native berry called a ‘Saskatoon’. These berries are very special …. the kind of special that only comes once a year.

Saskatoon berries look much like blueberries, but in fact are part of the rose family which includes apples, cherries, plums and of course roses. Saskatoons ripen in late June or early July. They grow in many conditions from sea level to mountain peaks and are less picky about soil conditions than blueberries. Trying to explain their flavor to anyone who has never tasted them is difficult and elusive. They’re sweet, dense, rich, seedy, slightly blueberryish, more almondish, a bit apple-y, dusky and deep. Like I said …. difficult to explain!

Throughout North America, saskatoon berries have a variety of names including: prairie berry, service berry, shadbush or juneberry.

Saskatoon berries work equally good in sweet treats as well as savory recipes. This pork tenderloin entrée is a good example of the latter.

Chicken Katsu is simply a Japanese version of chicken cutlets. While it is great to enjoy a good dish, its worth knowing where the idea originated.

Katsu was first created in the late 1800’s by a restaurant in Tokyo that wanted to offer a European style meat cutlet. Now, katsu can be found everywhere from convenience store takeaway bento boxes to Western style Japanese food restaurants. The name ‘katsu’ comes from the English word ‘cutlet’. It is typically made from either chicken breasts or thighs coated in panko breadcrumbs.

Frying or baking chicken cutlets is simple, but its like cooking pasta, when you get it right, it changes everything. Breading helps to seal in moisture during the cooking time. Its a basic process that’s used for making everything from chicken to onion rings. Japanese panko crumbs are lighter and crispier, the secret to ultra-crunchiness which yields to the kind of crust that you can actually hear when you bite into it.

Since its ‘Saskatoon Berry‘ time here on the prairies, I wanted to make some saskatoon chutney to have with these crispy cutlets.

Every year Canada celebrates its birthday on July 1st with parades, fireworks and other fun events. This year, due to the pandemic and out of respect for Canada’s Indigenous people, celebrations here in our city of Edmonton, Alberta will be virtual or be on a smaller scale.

No matter which way you decide to celebrate the day, we know good food will be an important part of it. Gorgonzola has been a favorite of Brion & I for many years. It’s actually kind of surprising as neither of us care for ‘blue’ cheese or Roquefort.

Gorgonzola is one of those classic Italian ingredients that’s more famous than understood here in North America. The name itself, refers to the little town in Lombardy, near Milan, where the cheese was invented.

There are two kinds of gorgonzola, Dolce (sweet) and Piccante (spicy). In Italian these terms mean fresh verses aged cheeses. Because dolce is softer and creamier, its great for spreading on bread or used in salad dressing, pasta sauce, pizza or burgers. Piccante is harder and tends to crumble.

This turkey burger is made special with the combo of gorgonzola, bacon and guacamole. Just great for celebrating Canada Day!

The wonderful thing about potato casseroles is that you can dictate the flavor by the types of cheese used as well as the added ingredients and flavor aids like herbs, garlic and spices.

There are many versions and variations of potato ‘bakes’. It comes down to little more than a free form of how the potatoes are cut and layered. Other ingredients such as herbs and cured meats like ham or bacon as well as smoked fish and other vegetables can be added.

With this recipe you are combining the best of all variations; scalloped, au gratin and dauphinoise. Béchamel sauce, a variety of cheeses and the flavor of garlic result in an amazing taste as well as the dish makes for some interesting eye appeal.

Having always had a passion for collecting recipes, I recall one of my mothers cupboard drawers being full of recipe pamphlets. I loved sifting through them to find a recipe I could make. Anyone who’s ever checked out the kitchen section of an antique store can attest, recipe pamphlets were once big business. Long before we had access to the internet, home brands like General Mills & Cuisinart regularly released pocket-sized magazines full of tips, recipes and instructions on their products. Glossy covers depicted the recipes inside, the price was right and they were easy to use. There was no reason to buy an expensive big cookbook when it was all here in a pamphlet form.

The Campbell Soup Company had its own kitchen dedicated to pumping out such pamphlets. In 1955, Dorcas Reilly, the recipe supervisor at the time, devised and tested the infamous ‘green bean casserole’ recipe. Her inspiration for the dish was to create a quick and easy recipe around two things most folks always had on hand in the 1950’s. They were green beans and Campbell’s cream of mushroom soup. Reilly’s recipe became immediately popular. This simple combination consisted of green beans, cream of mushroom soup, soy sauce, milk and french fried onions. The idea that it could be made ahead and reheated, made it perfect for holiday dinners. Even in the face of North America’s obsession with fresh, locally grown and artisan foods, its popularity continues.

Like with most iconic dishes, time brings changes and healthier upgrades or just different personal tastes. I’ve never been a fan of those french fried onions, so I opted for a crispy panko topping. Along with fresh green beans and mushrooms I’m using a bechamel sauce. It worked out quite nice.

I think it would be safe to say that turkey still rules the day as the most traditional centerpiece for the Canadian Christmas dinner. Canada is a country with a very diverse background, so we enjoy a mix of cuisines and traditions from all over the world. Although that festive foul remains the center focus, other dishes on the table are undoubtedly reflecting how Canadian tastes are changing.

The fact that people are travelling more, our knowledge of food has expanded dramatically. Its all about flavor now, which has led us to more exotic spices and ingredients. We have become much more sophisticated in our approach to preparing food.

Other changes at the holiday table are a result of the large numbers of people who have opted to become vegetarian or people by choice or health reasons need gluten-free dishes. If you are preparing your holiday meal around these different ways of eating or requirements, it will mean being more thoughtful about what you prepare.

Another noticeable shift has come with the desserts served after the big meal. The days are gone, for most part, for the traditional, heavier desserts. These choices used to consist of mincemeat pies, steamed puddings or fruitcake to name a few. The trend now is leaning more to lighter, fruity and creamy flavors such as lemon.

The big thing is, no matter what your meal entails, enjoy it to the fullest as this time, day and year will never come again. Once again, we opted to have stuffed turkey breast instead of roasting the whole bird. The ‘seeded’ crust added a new dimension that we really enjoyed.