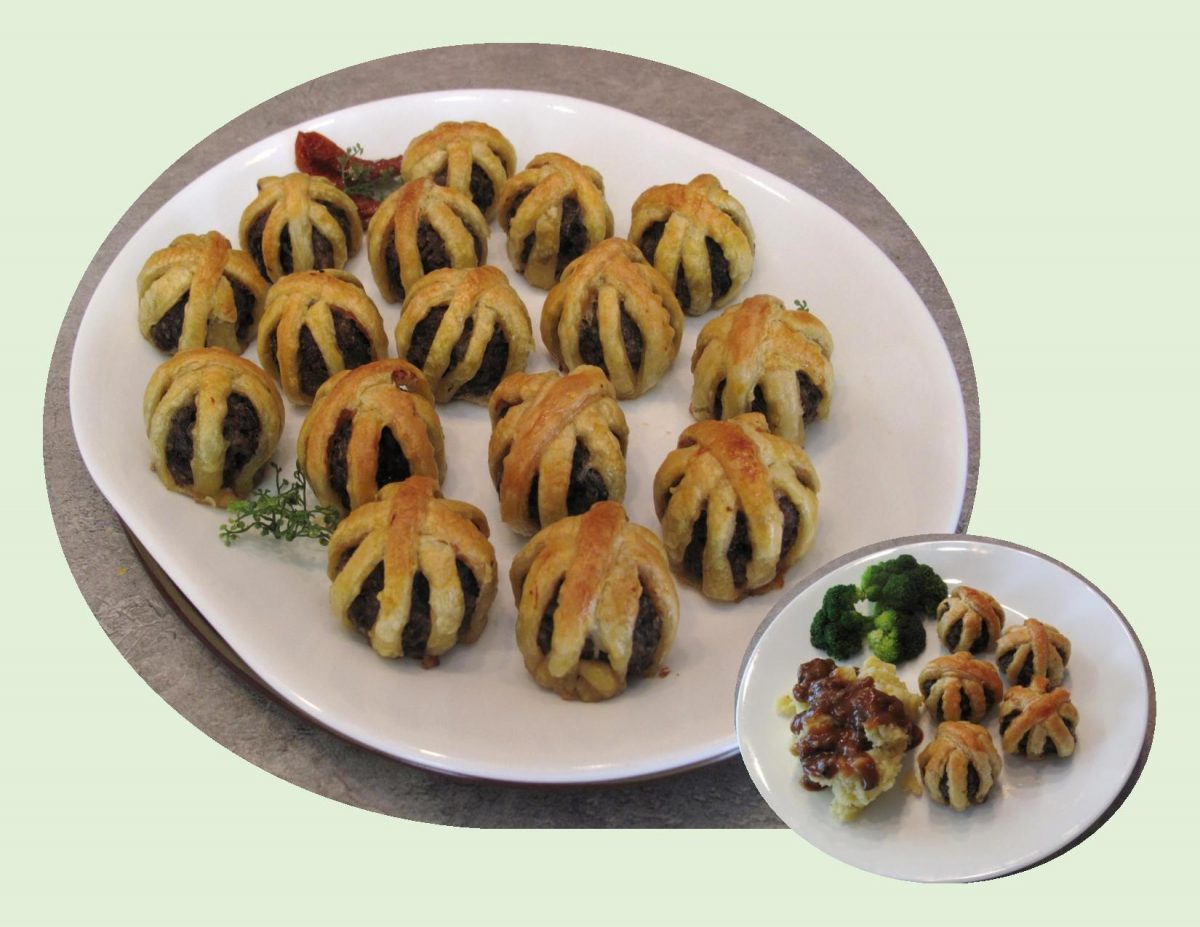 Meatballs don’t have to be boring. Tender, juicy meatballs, wrapped in puff pastry and served with a zesty sauce makes an easy, inexpensive version of the classic beef wellington.

Economical and versatile, cooking with ground meat opens up plenty of avenues for experimenting. Beyond reliable beef, almost all meats can be ground, but each kind of meat should be treated differently to fully enjoy the benefits.

Consider the fat content of ground meat before you buy. Some fat content is desirable as it adds flavor and helps to keep meat moist during cooking. Choose different types of ground meat for specific dishes. For example …. fatty beef makes juicier burgers but leaner ground turkey or chicken works better served as smaller meatballs or in a sauce. Ground pork makes for a cheaper burger than beef, plus it is unlikely to dry out. Flavor pork with spices like mace, or herbs like sage, thyme and fennel seeds and of course always ensure its cooked through. Ground meat is one of those things that generally ‘you get what you pay for’.

These meatballs make a tasty meal that can be ‘dressed up or down’, depending on what it is served with. 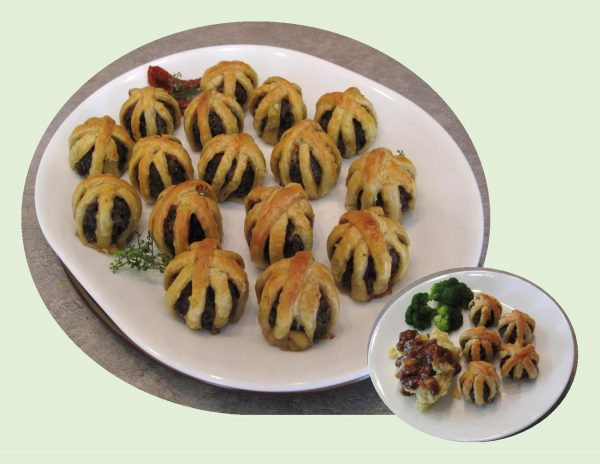 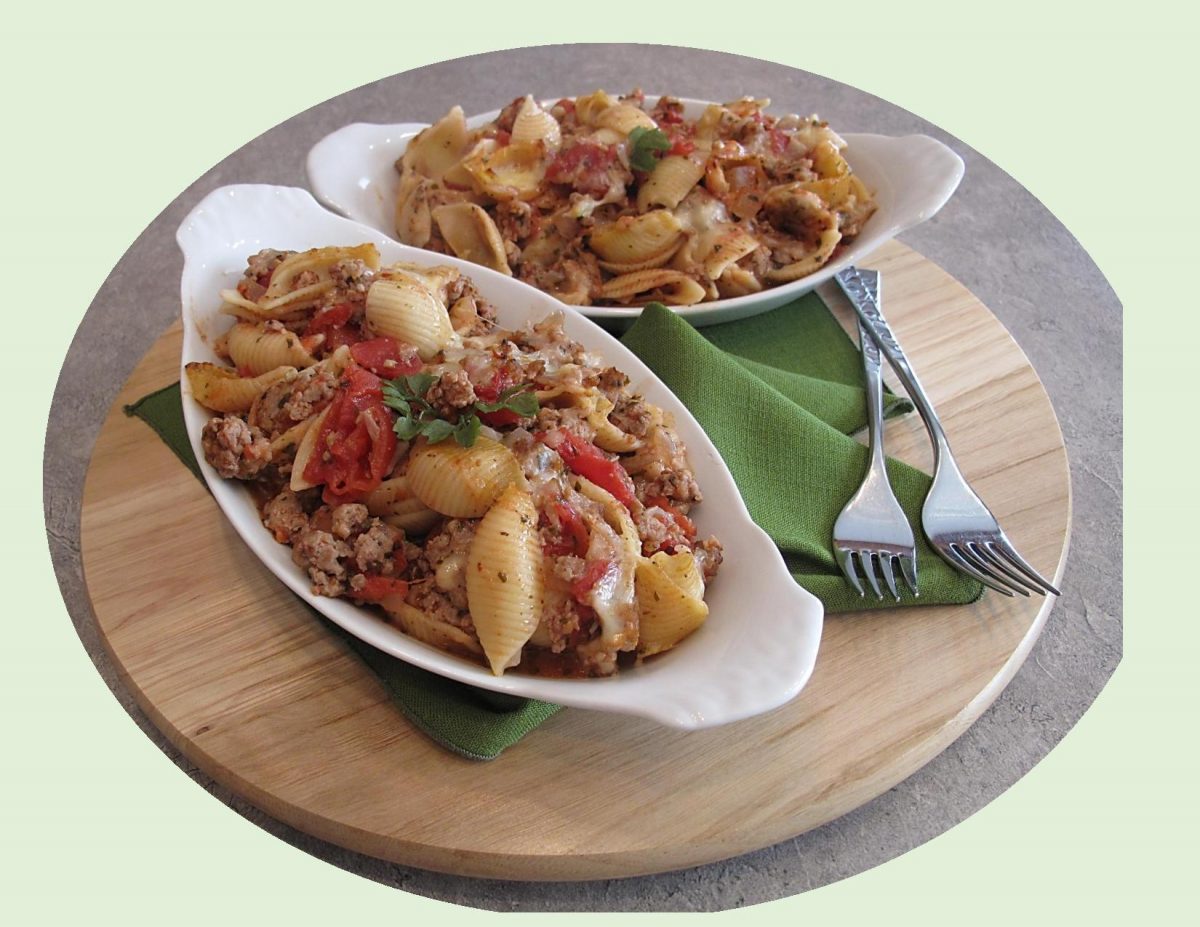 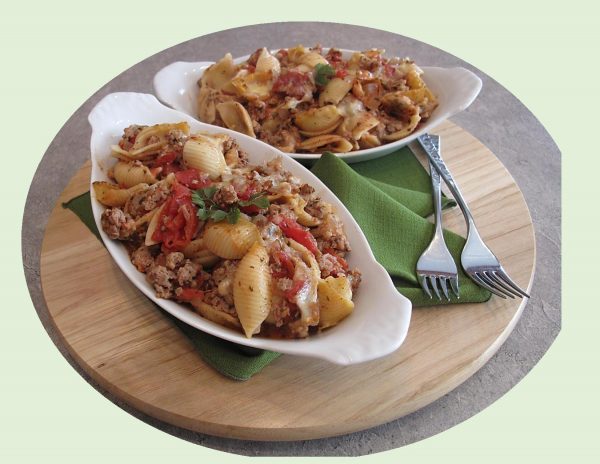 That expression, ‘what’s old is new again’, definitely can be applied to so many things in today’s world. Very often, when you think you have come up with a new idea its really just a modernized version of an old one.

As I’ve probably mentioned before, Brion & I really enjoy casseroles. I happened to recall a casserole that was published in Good Housekeeping in 1958. My mother made a version of it at that time. Being mostly vegetables, it had such a nice flavor. It was called Seven Layer Casserole consisting of vegetables, rice, tomato soup and sausage or ground meat.

With that ‘taste of a memory’ in mind, my recipe development turned into a savory layered casserole. I used vegetables, rice, cheese and ground pork with a layer of puff pastry. When you prepare it, the sheet of puff pastry is on top so it gets crispy, but when it is baked, you flip it over and it becomes a bottom crust.

Of course, we are talking about frozen puff pastry here. It seems it has become a supermarket staple, delivering all the glories of puff pastry without all the hard hours of work. This is a convenience food that’s perfectly useful for cooks of all skill and commitment levels.

All this talk of frozen puff pastry probably seems odd coming from someone who has made a living in the food industry. But lets face, to make it from scratch is either a labor of love or a sign of madness depending on who you are. So here’s my remake of that vintage 7-layer casserole. 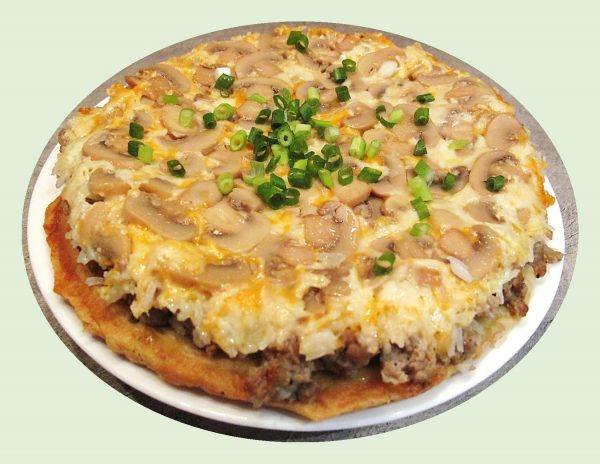 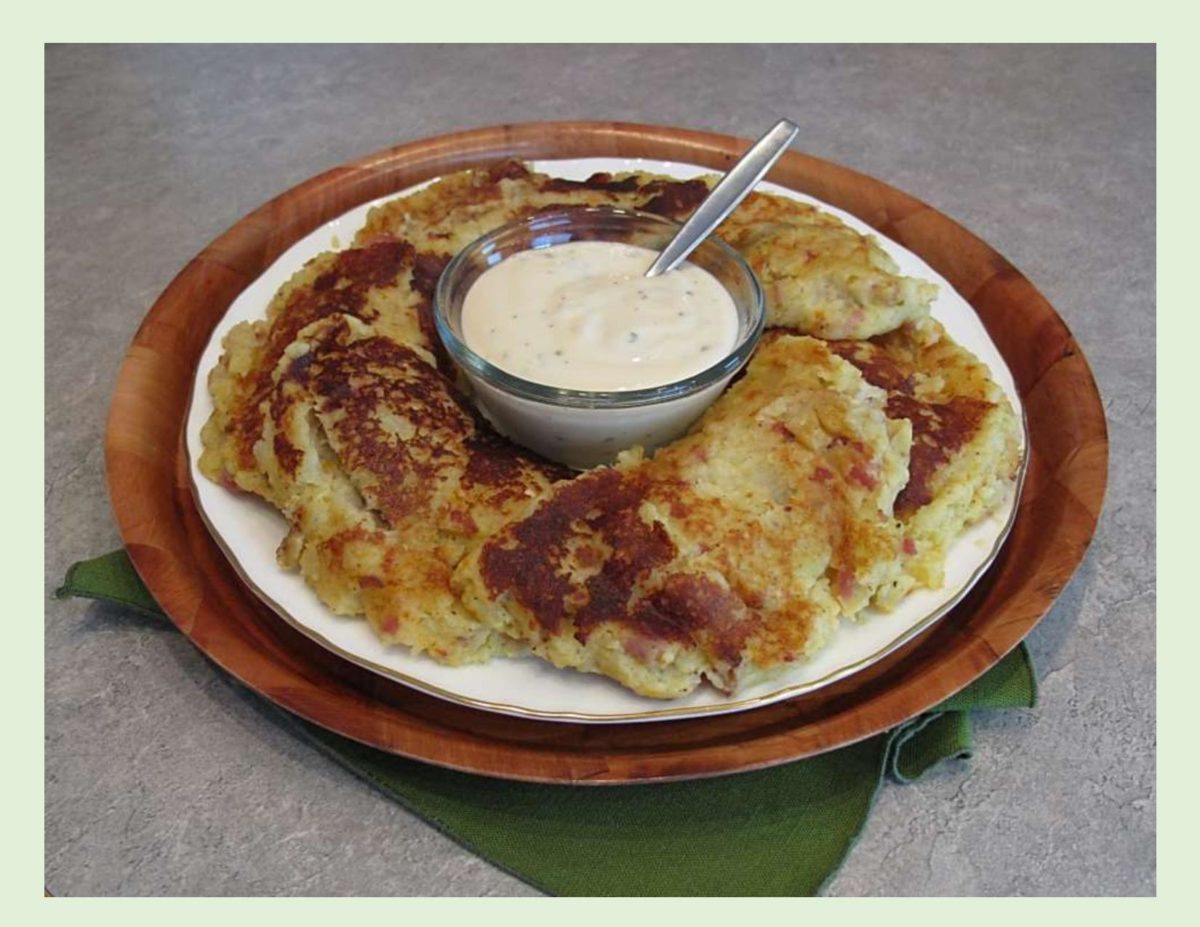 Potato pancake variations are present in National cuisines all over the world and considered by many to be pure comfort food. The nice thing is, you can create this great meal by using leftover mashed potatoes. It can be kept simple or you can amp up the flavor with cheese, onion, bacon or a variety of spices. I recall my mother making them. I think she just added some eggs, onion, a bit of flour and some salt & pepper to the leftover, mashed potatoes. They were made into patties and pan fried as you would a pancake.

Depending on which part of Eastern Europe you come from, the name varies — Kolduny, Zrazy, Kartoffelpuffer are just a few. Regardless of the name you call them, they are just simply delicious. The Russian version takes it a bit further. The potato pancake is stuffed with a filling and then fried to a golden brown.

After reading through numerous recipes, I decided to ‘meld’ some of them into my own creation. These are what developed — nothing pretty but really good flavor. Yes, truly comfort food. 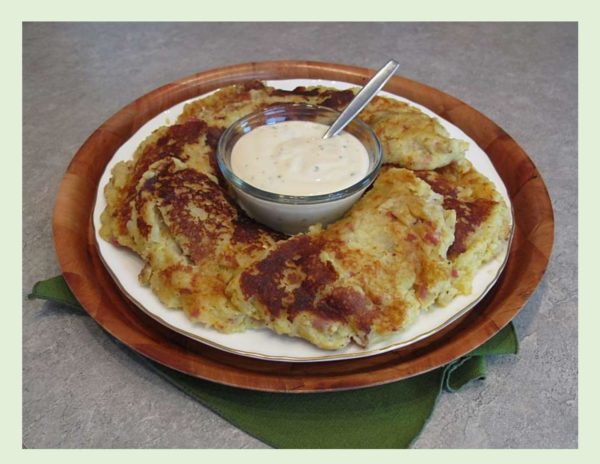 When I think of stuffed peppers, quiche never ever came to mind. I have always enjoyed quiche anytime of day, with or without crust. The idea of using a pepper as your ‘crust’ certainly puts a new twist on the traditional quiche.

I wanted to make these pepper cups for a supper meal and since there was no pastry involved here, bread sticks seemed like a good accompaniment.

Quiche is like making pizza– there are no limits to what the filling can consist of. For our meal today, I just put together a variety of items I had on hand for both the quiche and bread stick twists. It turned out to be real enjoyable and so easy.

Savored for centuries, crepes are popular not only throughout France but worldwide. Crepe making has evolved from being cooked on large cast- iron hot plates heated over a wood fire in a fireplace to pans or griddles that are gas or electrically heated.

Around the 12th century, buckwheat  was introduced to Brittany, France from the east. Buckwheat could thrive on the  desolate, rocky Breton moors and was high in fiber, protein and essential amino acids. At that point, all crepes were being made from buckwheat flour. White flour crepes appeared only at the turn of the 20th century when white flour became affordable.

Almost every country in the world has its own name and adaptation of crepes including Italian crespelle, Hungarian palacsintas,  Jewish blintzes, Scandinavian plattars,  Russian blini  and Greek kreps.

Although crepes are simple in concept, by creating fillings that are complex in flavors, takes this entree to a whole new level.

On July 25/2016, I posted a blog featuring both sweet and savory crepes you might enjoy to read. For something different today, I made ‘crepe stacks’ which have a savory filling of my own ‘design’. Hope you find time to make some. 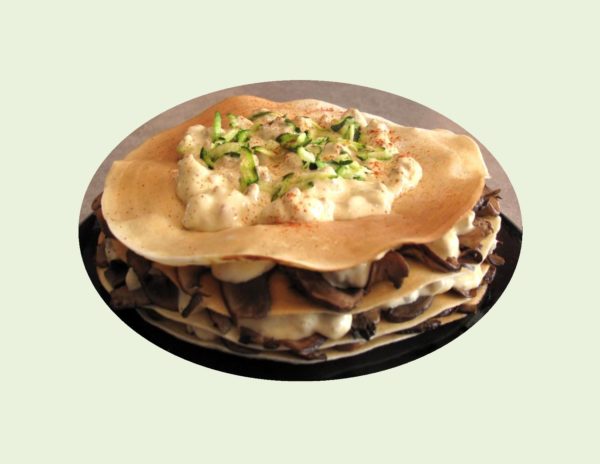 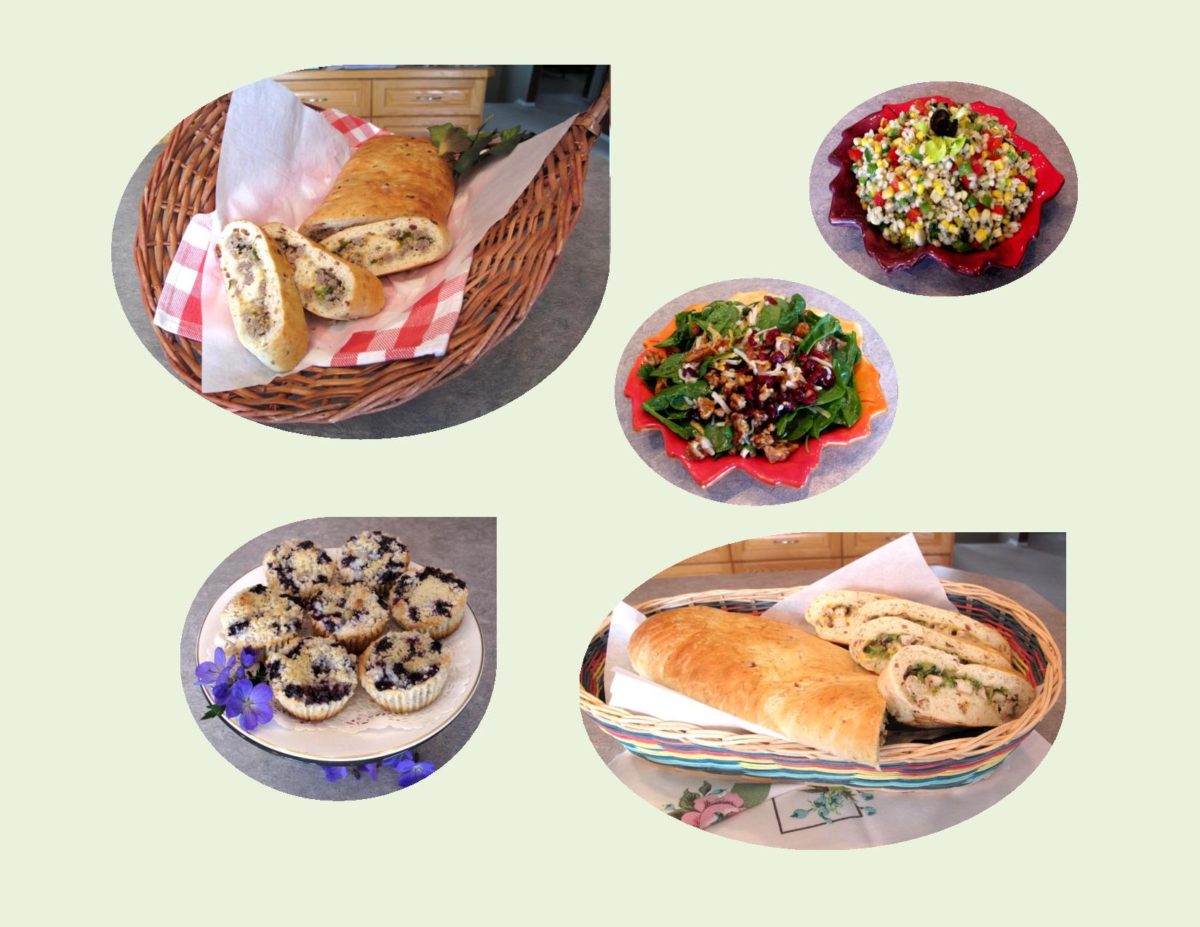 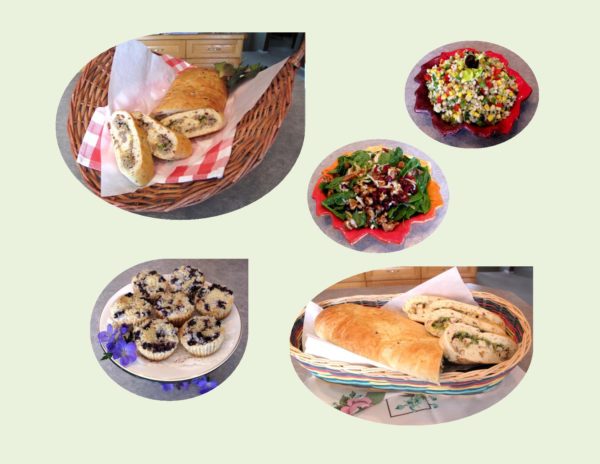