I have always favored using ‘conchiglioni’ pasta, the name derives from the Italian word meaning ‘seashells’. Their shape, size and consistency are the perfect vessel for bold, rich fillings and flavorful sauces. Baked pastas, or ‘pastas al forno’ as they are called in Italy, date back to the Renaissance when they were being served at the banquets of nobles.

Over the years, I have stuffed jumbo pasta shells with just about every imaginable filling I could conjure up. To say the least, I love this kind of meal.

Since we are just past ‘turkey season’ and if you are someone who enjoys that festive meal … here’s a new spin on it. Turkey, stuffing, sweet potatoes and gravy all tucked into some pasta shells.

Without a doubt, these shells were even better than I had expected and this recipe made enough that I froze some for another meal. What’s not to like about that?

Whether you prefer a sweet or spicy variety, there’s no denying the delicious versatility of Italian sausage.

The predominant flavor in ‘mild’ Italian sausage is fennel, or actual anise, a licorice like flavor with a little more earthiness. This emulates the style of sausages in Northern Italy, known for milder flavors with a noticeable presence of both fennel and garlic. It will also typically have a small amount of red pepper flakes to open up the flavors.

The ‘hot’ designation means a higher content of pepper flakes, or the addition of cayenne, giving you that spicier flavor that is more common in the southern regions of Italy.

‘Sweet’ is pretty straightforward, little bit of sugar, milder flavors around that, sometimes some mild herbs, typically a lot of basil and such to round it out.

In this meal, the layers of lasagna noodles blanket a creamy béchamel sauce and a filling with a savory ‘Italian sausage’ flavor and tender artichokes. Truly a comfort food meal.

No doubt, since we have just finished the 2019 Christmas season, you enjoyed some Swedish meatball hors de ouvers. Personally, I love the little morsels so I thought it would be interesting to turn them into a main course casserole.

I have heard the question asked as to what the difference between Italian and Swedish meatballs is. First of all, the meat blend of ground beef, veal and pork are the main players in both styles. The difference comes in the ratio of each meat being used. While both varieties include ingredients such as minced onion and milk soaked bread or crumbs, the seasoning in these two iconic meatballs differs greatly. Swedish meatballs traditionally use spices such as allspice, nutmeg, white pepper and ginger while Italian calls for grated Parmesan, garlic, parsley, fennel seed and oregano.

Another ingredient that is most always used in Swedish meatballs is mashed potatoes. Size is important … Italian meatballs (other than in soup) are quite large whereas Swedish are generally like a hearty teaspoon full.

When it comes to sauce, this is a big part of the flavoring component that sets them apart. Swedish meatballs are cooked in a cream gravy made with beef broth whereas Italian meatballs are served in a tangy, bright red tomato sauce.

All that being said, it brings me back to my casserole. It combines all the ingredients of the Swedish meatballs put uniquely together in a casserole and topped with a mozzarella cheese. Perfect January meal!

Do you recall the Monte Cristo sandwiches of ‘yesteryear’? There was a time when you could find this sandwich on most restaurant lunch menus across North America. Basically, its ham and cheese sandwiched between two pieces of french toast, smothered in egg batter, deep fried, sprinkled with powdered sugar and dipped in a side of jelly. It’s where salty meets sweet and savory.

This sandwich, although delicious, is neither health or diet food but sometimes its fun to just enjoy these kind of things in moderation, of course.

This ‘lasagna‘ turned out to be real tasty. It kind of puts a new spin on an old classic. Instead of french toast, the ham and cheese are layered in between a baked cauliflower mixture that resembles slices of bread or lasagna noodles. Serve with cauliflower sauce or a sauce of your own choice.

Well here we are, the end of October already, and Halloween has arrived. A number of years ago, Brion and I decided to take a different approach to this occasion. Rather than spending the evening running to the door to hand out treats, I would make some special goodies for our immediate neighbor’s ‘kids’. We have been lucky to have had the same neighbors for many years. Since food is my passion, its always fun to ‘create’ something that I think our four ‘young’ people will enjoy.

My choice of treats this year are brownie ghosts, krispie candy corn and some bite size pizzas. Most kids love chocolate so I think brownies will cover that and I swapped out the ‘waxy’ candy for rice krispies in the candy corn treats. Pizza bites aren’t exactly following the Halloween theme but the kids are getting older and I’m sure they will love them anyway.

Just an interesting little side note on the actual candy corn ‘candy’ since they seem to be synonymous with Halloween. Originally they were never tied to any time of year. Many candies of the day were molded into what was recognizable to regular folks. At the time, that was vegetables, fruits and other simple, earthy things.

When the Goelitz Confectionery Company first produced candy corn, it was called ‘chicken feed’. The boxes were illustrated with a colorful rooster logo and a tag line that read: ‘Something Worth Crowing For’. The multi-colored design was ground-breaking in the candy industry at the time it was invented. One of candy corn’s least favored qualities is that waxy texture. Strangely enough, even after more than 120 years, it still has a huge following as well as many other candy corn related and/or flavored recipes on the market.

ENJOY YOUR HALLOWEEN IN WHATEVER WAY WORKS FOR YOU!

Over the last few years, marinated artichokes have become one of the ‘go-to’ ingredients on my pantry shelf. Jarred marinated artichoke hearts add an instant burst of flavor and unlike fresh artichokes, they are available all year around. Might I add, they require zero preparation! Keep in mind, these are the ones in glass jars, not the canned ones that can be flavorless and soggy.

Some of the ways I have made use of them were: as a pizza topping, veggie dip, on crostini, with roasted potatoes, omelettes or in au gratin dishes.

As you have probably noticed if you follow my blog, I love savory pastries all year long. Spring through winter they showcase their ingredients so beautifully. If you’re someone who feels intimidated by pastry, galettes give you opportunity to make a free-form masterpiece. This recipe simplifies it even more by using frozen puff pastry. Yet another reason to keep a package on hand in your freezer.

I guess this meal could be classed as making the most of a traditional comfort food. Scalloped potatoes seem to feed both stomach and soul. Maybe that comes from so many of us having childhood memories of this dish. It seems most of the recipes now contain cheese. From what I remember, it was basically thin sliced potatoes and onions placed in a baking dish alternated with flour, butter, hot milk, salt & pepper and topped with buttered bread crumbs. It tasted so creamy and good!

Meatloaf and scalloped potatoes seem to be synonymous with each other. When I saw this recipe for scalloped potato roll on the internet, I felt it certainly kicked the two up a notch. You can use whatever ground meat that you prefer. I like a combo of beef, veal and pork. Beef is necessary for texture as well as flavor, veal contains a high level of gelatin keeping meat tender and the pork adds flavor. Just a little side note for what its worth — if you only have ground beef on hand, add half a teaspoon of unflavored powdered gelatin to 454 gm. The gelatin will act much like veal, keeping the texture softer and moister.

This meal looks like a lot of work but it really isn’t. The combo of roasted potatoes, ground meat, three cheeses and spinach or chard is excellent.

Even if it is a little hard to admit summer has ended and fall is officially here, Oktoberfest seems like a great little celebration to ease into the coming winter months.

Oktoberfest began as a wedding celebration more than 200 years ago in Munich, Germany, when Bavaria’s, Crown Prince Ludwig married Princess Therese of Saxony-Hildburghausen on October 12,1810. The wedding was celebrated with multiple days of drinking, feasting and horse races. Everybody had so much fun that it was resolved to repeat the celebration, which has been done, every year since.

Beer enthusiasts from all over the world flock to Munich for Oktoberfest, where they feast on everything from steins of beer to plates of sauerkraut, bratwurst, cabbage rolls, sausage and wiener schnitzel. Bavarian music fills the air to promote the fun atmosphere of Oktoberfest.

While the true celebration has to be experienced in Munich, there are actually some great Canadian events that try to duplicate the festivities without having to travel abroad. In different parts of the country this is a fun and social sampling event featuring many local craft and authentic Bavarian breweries as well as authentic food, Oktoberfest music, dancers, games, etc..

To acknowledge this holiday we are having a corned beef, cabbage & potato pizza with a rye bread crust. It seems a good mix of German-Canadian food to me ?! 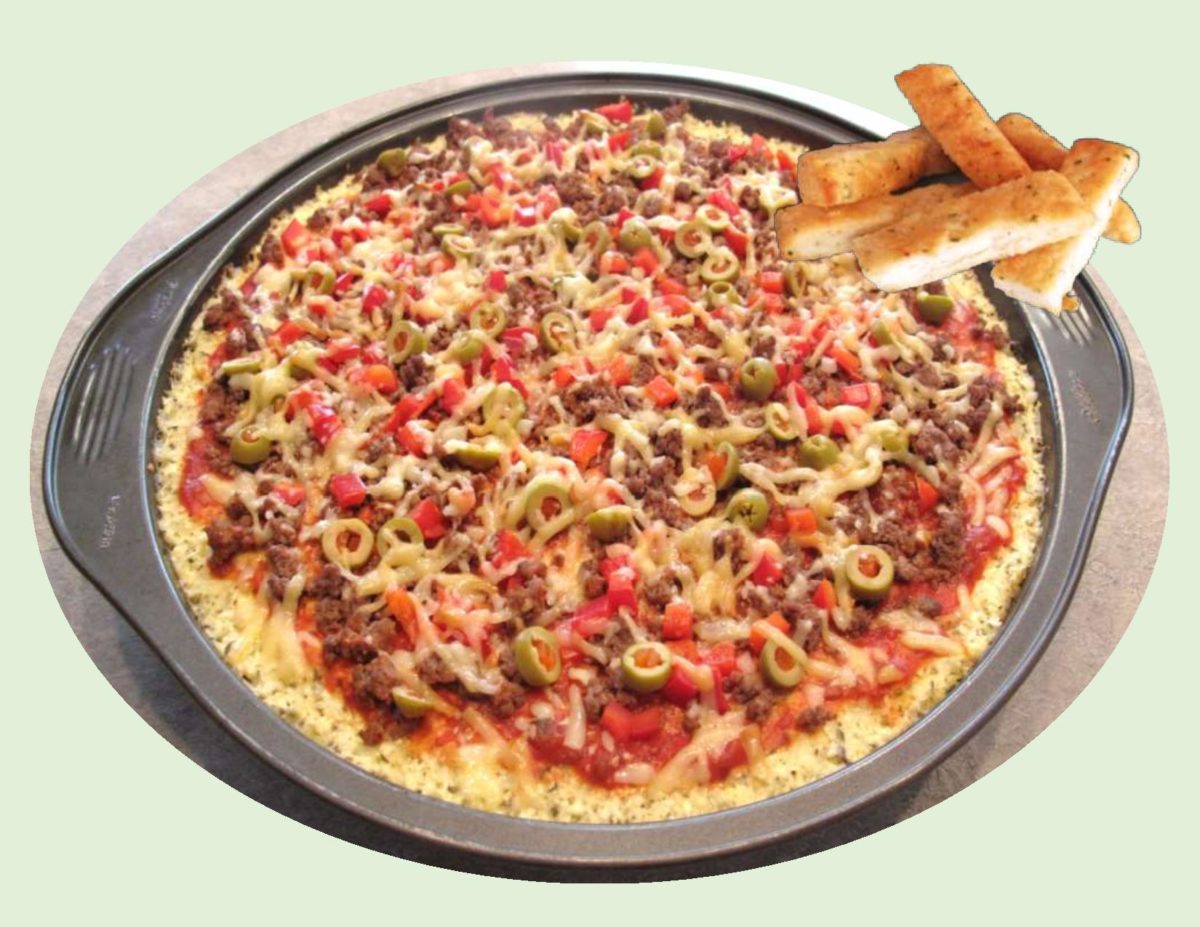 Ricing vegetables has been around for as long as I remember. Maybe not to the degree that is happening today. I recall a utensil my mother had that resembled a large garlic press. It was called a potato ricer and to my knowledge was only used for potatoes to change the texture.

As time has passed, this idea has evolved into so much more. Cauliflower ‘rice’ came on the scene as a popular grain-free alternative to rice. As with many food trends, the ‘riced’ craze has continued using other veggies like sweet potatoes, broccoli, carrots, onions and peas.

Making your own riced vegetables is even easier than in days gone by. Just trim, chop and pulse your veggies in a food processor. Cook with a quick steam or saute and flavor with some fresh herbs and spices. Of course, you can always change it up with other chopped veggies, nuts or a sprinkle of cheese.

Riced cauliflower can be used on its own, fried, in baked casseroles or as I’m using it today, in a pizza crust. A different texture than traditional pizza crust but loaded with flavor. Its sort of firm, chewy and soft all at the same time. I wasn’t sure how well we would like this pizza but it tasted just great with the addition of some homemade bread sticks.