This is a meal that is as much about the process as the final plate. Most everyone has made ‘zucchini boats’ at one time or another and this is a lovely rendition of them.

I have learned from travelling across cultures, that one thing can truly bring people together, no matter where in the world you are from, and that is food.

No doubt, every culture has its own equivalent of ‘comfort food’. Stuffing vegetables is a Middle Eastern food trend that has been popular for thousands of years, combining spices and food groups in unique ways.

In truth, zucchini are simply immature cultivars of the squash family, eaten while the rind is still edible. Developed in Northern Italy, zucchini was not introduced to the rest of the world until the 1930’s.

‘Kousa Mahshi’ (Arabic for stuffed zucchini), is a type of yellow squash found in the Middle East which is hollowed out, stuffed with a meat/rice filling and steeped in a seasoned tomato broth. These were likely a reinvention of the ‘stuffed grape leaves’  common in the Mediterranean, Balkans and Persian Gulf.

I found the idea of hollowing out the small zucchini and stuffing them quite unique as opposed to just slicing them to make ‘boats’. Rather than using a meat/rice combo in my zucchini rolls, I used a ground turkey/mushroom stuffing and served them over a ‘simple’ Spanish Rice Pilaf.

This is not a difficult recipe, just one that takes a bit of time but is worth it in taste and eye appeal.

From what archaeologists can determine, pita bread originated with peoples west of the Mediterranean. Pitas have been both a bread and a utensil throughout the Middle East and Eastern Mediterranean.It is a rather  simple bread that could be made with limited technology. Pitas are cooked quickly at a relatively high temperature. The flat dough expands dramatically to form an interior pocket from steam.

Pitas’ popularity is partially attributed to using the pocket like a sandwich bread. Many traditional cultures use the pita more like a soft taco or the pita is pulled apart into pieces and dipped in a variety of sauces.

The possibilities of being able to pack, dip or wrap whatever you choose in the pita bread is limitless. Their taste can only be appreciated when eating your pita with different foods that will compliment them.

Although pitas are enjoyed all through the year, they seem like an easy summer meal to enjoy. 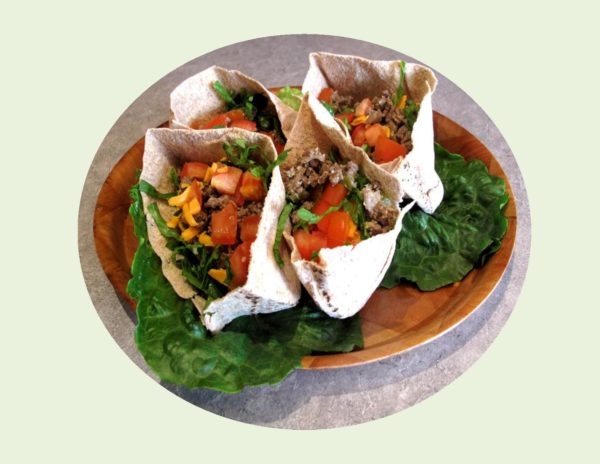