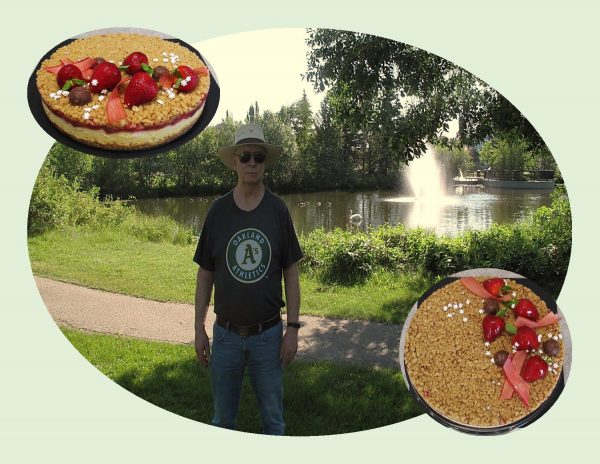 Glazed fresh fruit tart looks so elegant and summer-ish. They are the perfect dessert, whether your meal is casual or formal. In some ways, I guess its a version of a fruit pizza.

Apart from the fresh fruit and glaze, pastry cream adds a nice base to the tart. A custard pudding hybrid, pastry cream is used for ‘filling’, in the cold form, not as a pudding. Widely used to fill desserts like napoleons, cakes, cream puffs, tarts, etc.

To define, pastry cream is basically custard thickened with cornstarch and has a higher stability as compared to custard puddings which use just eggs to achieve their creamy texture. Vanilla is the classic flavor because it has to complete other flavors of the dessert. Pure vanilla is always best as the artificial flavorings add bitter taste profiles. In addition, some alcoholic desserts use pastry cream mixed with rum.

This tart has a layer of vanilla pastry cream, topped with raspberries and blueberries then brushed with an apricot glaze.

The precise origins of Red Velvet Cake remain elusive, as several times and places have claimed partial credit for producing it, with the different elements coming together as separate puzzle pieces.

One common legend is that it was first created in the kitchens of New York’s Waldorf Astoria hotel. Another story surrounding the cake is that the Canadian department store Eaton’s was responsible for its creation, as it was a popular choice in the retail chain’s bakeries and restaurants in the 1940’s and 1950’s. Although the company promoted the cake by saying the recipe was a closely guarded secret, the cake’s deepest roots appear to be traced more accurately back to the culinary traditions of the USA’s southern states.

The term ‘velvet’ was used in Victorian England to describe cakes with a fine crumb and a soft texture, distinct from other confections such as pound or sponge cakes. In the late 1800’s, what we know as brown sugar was commonly known as ‘red sugar’. So, at that time any cake made with red sugar and fine cake flour could be referred to as a red velvet cake.

Attempts to explain the red cake’s inception include use of boiled beets by bakers affected by rationing during WWII to enhance the color of their cakes. Another possibility is that because natural pigment of cocoa takes on a reddish hue when mixed with acidic substances such as vinegar or buttermilk, both of which may well have been included in early chocolate velvet cakes. Unlike today’s more common Dutch process cocoa, the PH of natural cocoa does cause a chemical reaction with acid causing a very slight reddish hue.

Now it seems when it comes to the white icing, the traditional kind used was a French style roux icing, which is also known as ‘ermine’ icing. These days, however, cream cheese frosting and buttercream frosting are much more popular and synonymous with the red velvet cake.

I’m not a food historian but as you’ve probably noticed, I do love delving into food history. Today’s blog recipe is for some red velvet cookies that are perfect for the Christmas season. Some time ago I saw this idea on the internet. I tucked it away in my ‘must-try’ file …. so today’s the day I’m trying my adapted version.