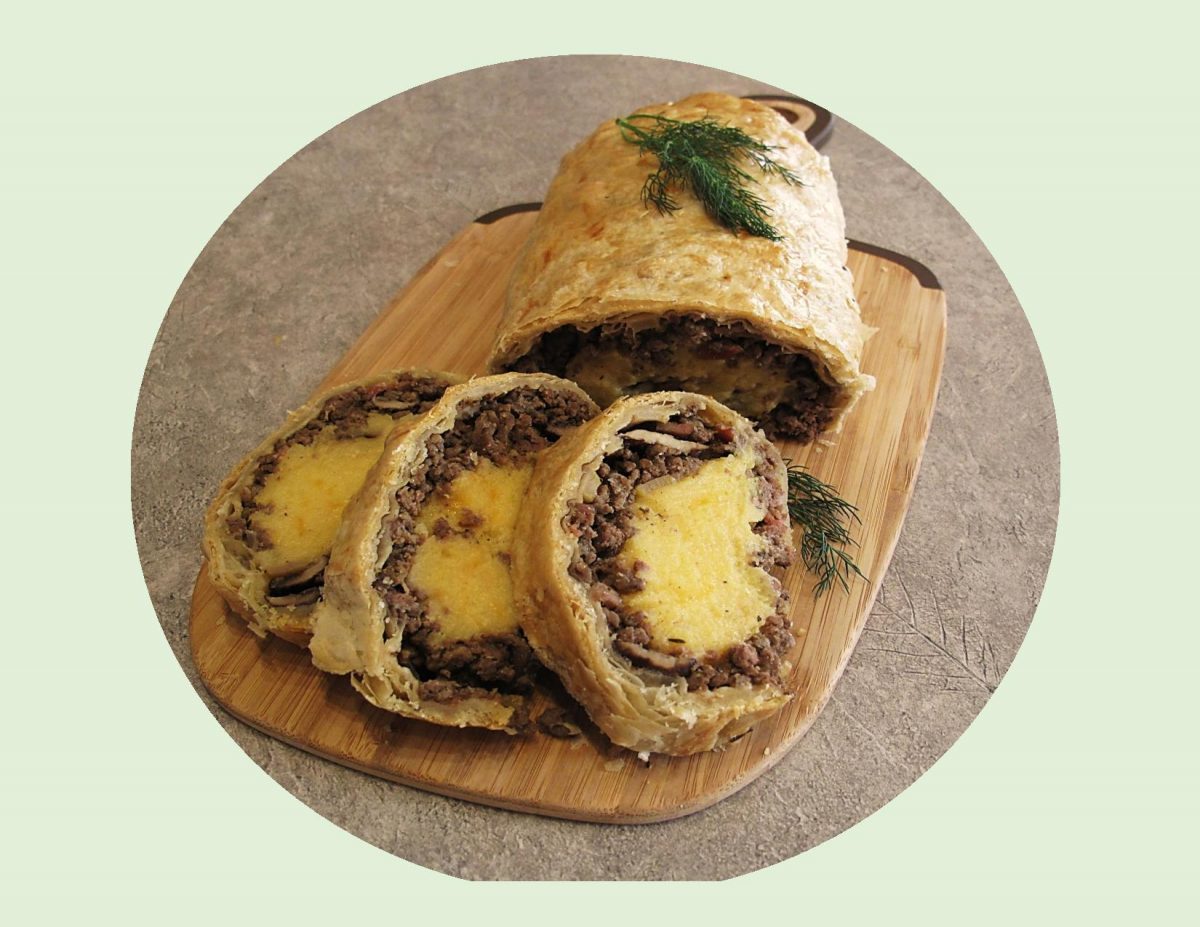 Today, November 24th, our neighbors to the south in the USA, are celebrating their Thanksgiving Day. It encompasses both religious and secular aspects … being both a harvest festival and a festival of family.

Here in Canada, we have already enjoyed our Thanksgiving in October but I thought it would be nice to acknowledge their holiday with posting a special meal.

While a classic beef wellington makes for a elegant dinner, it is easy to re-create a Wellington into a gourmet, hearty meal but on a more reasonable every day budget & time frame. Rather than using an expensive steak cut, this beef wellington recipe uses inexpensive ground beef and puff pastry sheets. The ground meat can be changed to ground pork, chicken, turkey or sausage. The list of additions to the meat is endless ranging from mushrooms to cheese. Some bacon mixed with the beef gives the dish that nice bacon impact that is very tasty.

This classic beef wellington-revisited is not only delicious but decadent. It is so good with a mushroom gravy.

Stuffed cabbage rolls are a unique blend of various flavors. The art of seasoning is about far more than adding a few grinds of salt and pepper. It’s more about sorting out the sweet, sour, savory and bitterness balance.

Food history tells us cabbage rolls have their roots in the ancient Middle East and spread to Eastern Europe as trade routes flourished with various ethnic groups migrating. Many countries lay claim to their origin, which accounts for the several interesting versions on the traditional recipe. For example:

Ukrainian holubtsi  are typically vegetarian, filling pickled cabbage leaves with either buckwheat and wild mushrooms or a mixture of whole grains and root vegetables, braised in tomato juice or vegetable stock served with perogies.

Poland’s golabki, translating to ‘little pigeon feet'(named after the French dish that wrapped cabbage around cooked pigeon), stuffs the leaves with pork, beef, rice or barley, accompanied by sour cream and sweet paprika.

Romanian sarmale combines ground pork, caramelized onions and rice nested in a pickled sauerkraut leaf, then smothered in dill and tomato sauce. It is often topped with bacon or smoked sausage.

Egyptian mahshi kromb are simmered in an aromatic tomato-based sauce with mint, cumin and other Middle Eastern herbs and spices.

Jewish holishkls are a combination of ground beef, rice and raisins enveloped in cabbage leaves and simmered in a sauce of brown sugar, lemon and tomatoes.

Today’s blog recipe gives you some of those same traditional flavors without the fuss of rolling the cabbage and meat. Brion and I really enjoy this particular version. Of course, it’s a given that most recipes will always need tweaking to account for the different cooking conditions and personal tastes.