While the origins of the black forest cake aren’t all that clear, some historians believe that its origins can be traced back to the Black Forest Region of Germany. This part of Germany is well known for its sour cherries and ‘Kirschwasser‘ … a clear cherry brandy.

This iconic creation is a layered confection of a liqueur ‘soaked’ chocolate cake with rich whipped cream and sour cherries between its layers. The liqueur and cherries give the cake an intense and unique fruity flavor. It’s these sour cherries which gave it its German name: Schwarzwald Kirsch Kuchen or Black Forest Cherry Cake.

There are many origin stories about the cake. Some sources claim that the name of the cake is inspired by the traditional custom of the women of the Black Forest region, with a characteristic hat with big red pom-poms on top called a ‘Bollenhut’. The earliest published written record of black forest cake was in 1934, by a German confectioner. Today, the cake is well known worldwide and probably one of the most popular cakes in Germany.

Since we just happen to have a nice little sour cherry tree growing in our garden, why not put some of them to good use in these cakes?! 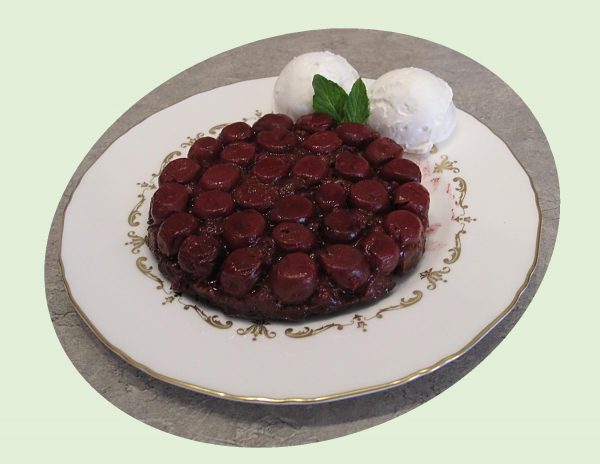