When you cook meatloaf/roll were connected to something bigger …. a tradition and a time line. A comfort food that has been enduring not only an answer to hunger but is served without undue fuss or expensive implements. It reigns supreme.

The reason meatloaf has stayed with us through so many generations is because it is a master of evolution. It can be personalized and adapted any number of ways, all the while requiring only basic skills.

In the 1955 edition of the Good Housekeeping Cookbook, a recipe for ‘mushroom-stuffed meatloaves’ was featured. To enliven a simpler offering, there was an inexhaustible trend for garnishing, glazing, saucing and decorating.

Then in 1966, the Campbell’s Soup Company featured a recipe for a ‘rolled, stuffed meatloaf’ to promote their tomato soup (in place of traditional tomato sauce). The idea was that by rolling a vegetable into the meatloaf, you could save the work of creating a separate side dish. A new one dish meat and vegetable dinner …. and soup makes it great!

The fact that meatloaf takes on variations so easily shows how it dresses up just as well as it dresses down. This meal definitely does not lack in flavor.

There are many ways to make and eat a burger and onion rings. I think this version is about the most efficient there is. Burger meat stuffed with onion rings, cheese and bacon, then coated with french fried onions and baked!

I don’t use a lot of the purchased french fried onions but sometimes you just need to switch things up. Breadcrumbs are good ….. without them there would be no crispy, breaded, pan-fried fish or oven baked chicken tenders.

The history of the french fried onions is somewhat sketchy, but they are believed to have been created in the thirties by a company called Olney & Carpenter.

Fried onions became famous in the fifties as an ingredient in the classic ‘green bean casserole’. Several companies acquired the product through the years until French’s took it over in the eighties. The onion pieces do not resemble onion rings and are more like onion chips. They are crispy right out of the container and should remain crispy for several weeks if stored properly.

I found they added extra flavor and crunch to these ‘burgers’. I myself, am not much for burgers but I have to admit I did enjoy these. 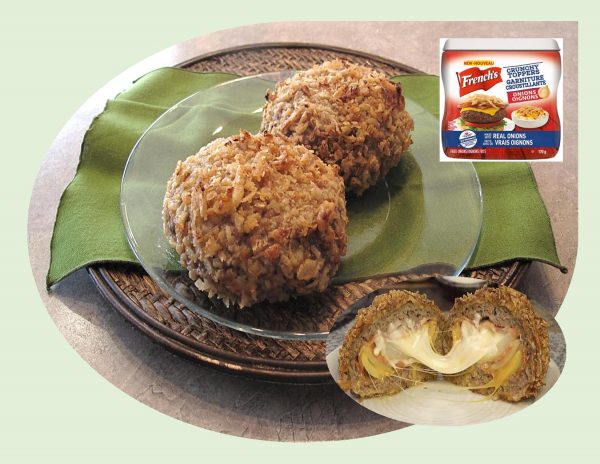